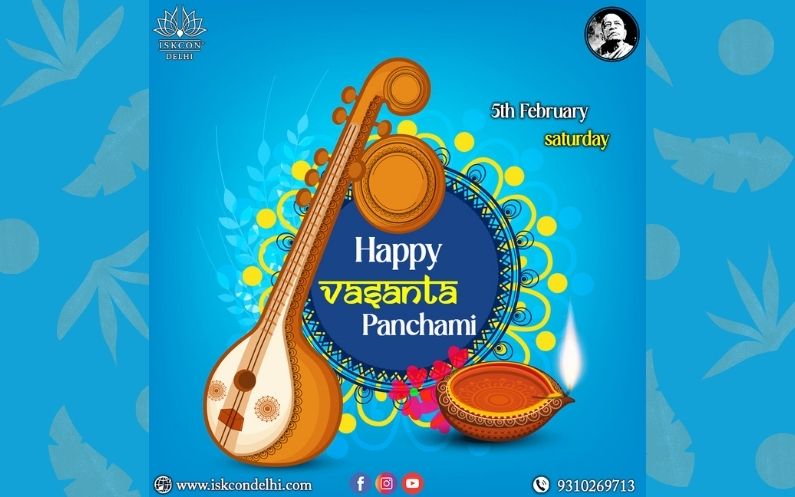 Vasant Panchami is a spring season festival as per the English calendar, celebrated throughout India. Therefore, worshipping mother Saraswati, the goddess of education, creativity, and music, is of great significance. It is also quoted that on the day of Vasant Panchami, Brahma created the goddess Saraswati. That’s why worshipping mother Saraswati on this particular day is unique.

It means – Supreme consciousness in the form of goddess Saraswati protects our intelligence, mind, and psychology. Whatever character and intellect we got are because of mother Saraswati who has unique opulence in terms of prosperity and form. Here supreme consciousness means the Supreme Personality of Godhead, Shri Krishna, the original cause of all causes.

“O conqueror of wealth [Arjuna], there is no Truth superior to Me. Everything rests upon Me, as pearls are strung on a thread.”

The supreme personality of Godhead has given different services to His devotees to govern the material world. For example, Brahma Ji is responsible for the creation, Lord Shiva for annihilation, goddess Laxmi for wealth, and goddess Durga for protecting this material world compared to a prison. Similarly, goddess Saraswati is given a department of knowledge, creativity, and music which she is governing very skillfully. Goddess Saraswati bestows these qualities upon those who worship her and please her with their rituals. However, goddess Saraswati never forgets that the supreme personality of Godhead is her master and all demigods-demigoddess are being engaged in His service. This can be illustrated by the below example –

We can see one more incident where goddess Saraswati showed her allegiance and devotion to the supreme personality of Godhead, Shri Krishna. This particular example is from Chaitanya Mahaprabhu’s life who Himself is non-different from Krishna. Keshav Kashmiri, a great scholar and a great devotee of mother Saraswati, came to Navdwip for debate based on scriptures. He had already visited all the learning centers of India and was unconquered in all of them.

Once Chaitanya Mahaprabhu who was popularly known as Nimai pandit at that time was on the bank of river Ganga. There He met Keshav Kashmiri and asked him to create a verse to praise the river Ganga. Keshav Kashmiri, being a learned scholar, created 100 verses in a few minutes. Keshav proudly spoke all 100 verses to Nimai. Nimai not only learned all the 100 verses instantly but also quoted various grammatical errors in the 64th verse. Nimai also quoted errors in a few more verses. Keshav Kashmiri was amazed and stunned at that.

All the above incidences show that goddess Saraswati is a unique devotee of Lord Shri Krishna. She is using her post and designation to assist devotees of the Lord. Let us pray to mother Saraswati on this auspicious occasion of Vasant Panchami that we all dedicatedly devote ourselves to the selfless service of the Lord and his devotees; that we should develop a service attitude and make this human form of life worthy.