The well-known Sanyasi, a glorious spiritual master at the age of 69, who changed people’s minds with Love, reverence, and unfathomable dedication, set a new record in the world and showed Indian civilization in front of everyone in every corner of the world.

His Journey from Devotion to Establishing ISKCON

India has been the land of sages for millions of years. Thousands of saints have irrigated this land with their knowledge. This Vedic culture is considered to be the biggest heritage in the world. But in the period under the rule of the invaders, this precious culture has declined.

Due to this decline, there has also been a violation of the ethics of the saints and the faith in the religion among the common people has also reduced. At such a time, a saint was born in the world to disseminate the message of Supreme Lord Sri Krishna to the people. A saint who in his last stage of life spread the knowledge of Sanatan Dharma to the entire world while facing difficulties at the personal level.

India Became Famous Across The Globe

Several saints of India became famous across the globe. But Srila Prabhupada has become such a sage who made Bhakti, spirituality accessible and easy for all beings.

Today, it's all because of him, there is no corner left in the world where there is no Lord Krishna devotee. Whether it is America or Europe, Arab countries or China, Taiwan or Japan in the world at every place, Lord Jagannath Rath Yatra is organized.

From the parents to the children at home are engrossed in devotion to Lord Krishna. They have made Lord Krishna an inseparable part of their lives. Let's talk about this great personality now!

Meeting of Srila Prabhupada with His Spiritual Master

Srila Bhaktisiddhanta Saraswati Thakur was a prominent Bhakti scholar and the founder-acharya of the sixty-four (64) branches of the Gaudiya Mathas. He liked this newly educated young man and convinced him to dedicate his life to teaching Vedic knowledge to the western world. Influenced by his teachings, Srila Prabhupada resided eleven years later in Allahabad in 1933 and became his formally initiated disciple.

In their first meeting, Srila Bhakti Siddhanta Sarasvati Thakur requested Srila Prabhupada to propagate Vedic knowledge in the English language. After a few years, Srila Prabhupada wrote a commentary on the Bhagavad Gita. In 1944 he started the English magazine “Back to Godhead” without any help.
Recognizing Srila Prabhupada’s philosophical knowledge and devotion, the Gaudiya Vaishnava Society honored him with the title of ‘Bhaktivedanta.’ In 1950, Srila Prabhupada retired from married life at the age of 54. After four years, he devoted more and more time to study and writing after adopting the Vanaprastha ashram. 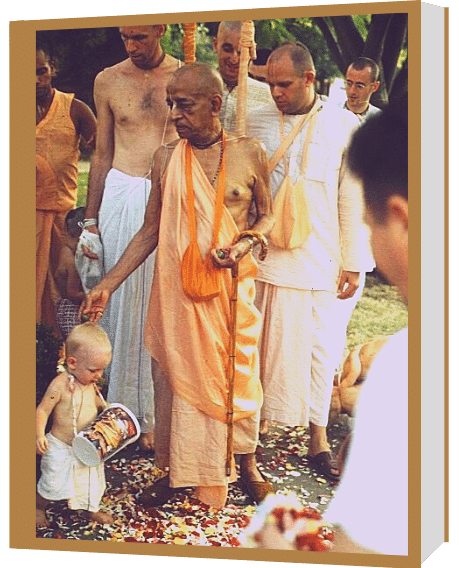 Srila Prabhupada went to Vrindavan where he lived in the historic medieval temple of Sri Sri Radha-Damodar in odd conditions.

In temple, he spent most of his time in his deep studies and writings. He accepted the highest ashram sannyasa of his life in 1959.

Srila Prabhupada also started working on the masterpiece of his life at the Radha Damodar Temple. Srila Prabhupada wrote an English translation of the Srimad Bhagavata Purana containing 18000 verses and a book “Easy Journey to other planets”. 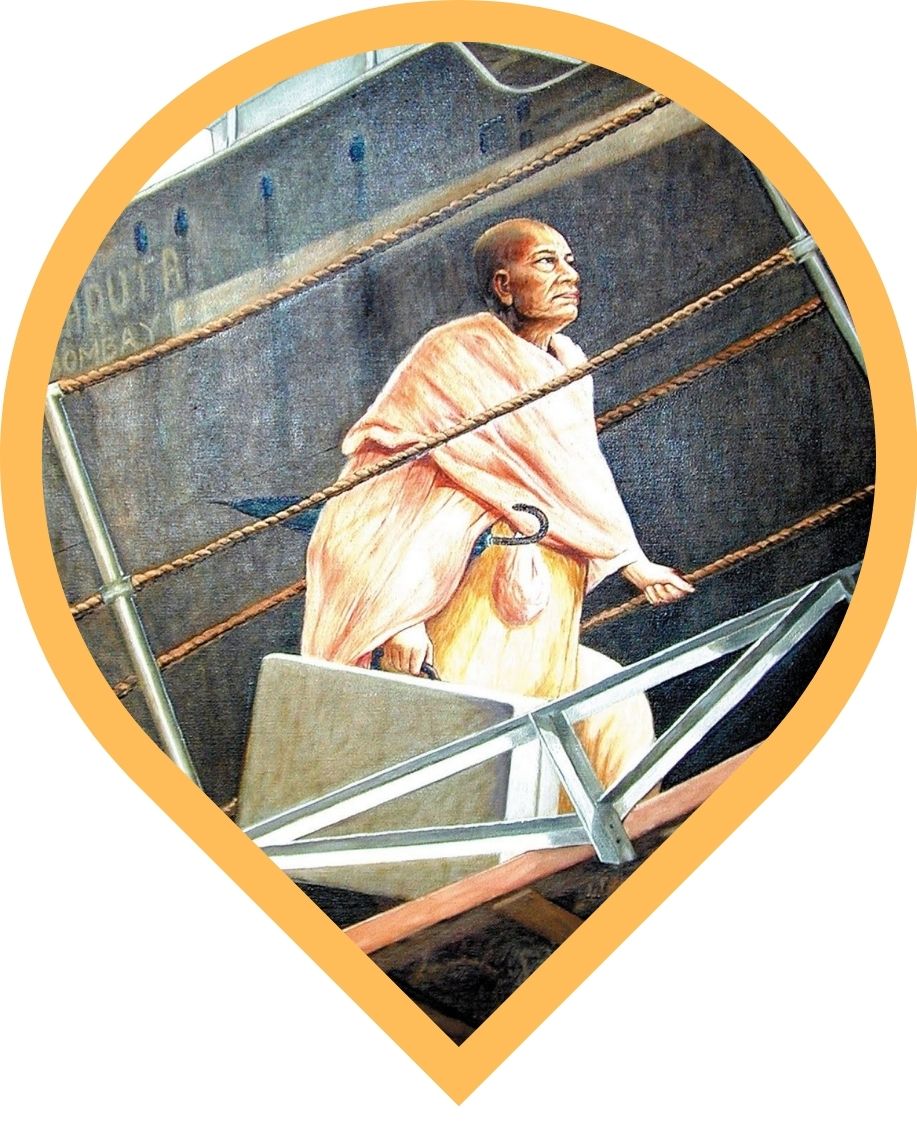 Srila Prabhupada’s Journey to the USA

After publishing the three volumes of Srimad Bhagavatam, Srila Prabhupada went to the United States in 1965 to complete the mission of his spiritual master.

After tireless efforts at the age of 69, he reached America after 37 days of the arduous journey by a cargo ship named Jaladuta but he had no idea of where to go.

There were two heart attacks during the journey but his determination to promote Krishna remained firm. He wrote in his diary that “Oh Krishna, I do not know what is in your mind, the people here who are materialistic will listen to me or not, but I am so sure that if you have sent me there must be a plan and I am ready to fulfill your every objective like a puppet. Make me dance the way you want me to dance.”

From then till the end of his life he had written authentic translations, commentaries, and summary studies on the philosophical and religious texts of India.

In July 1966, Srila Prabhupada founded the International Society for Krishna Consciousness with great difficulty for about 1 year. Under his thorough guidance, this society expanded over a decade into a worldwide association of approximately 108 temples, ashrams, schools and institutions, and agricultural communities. 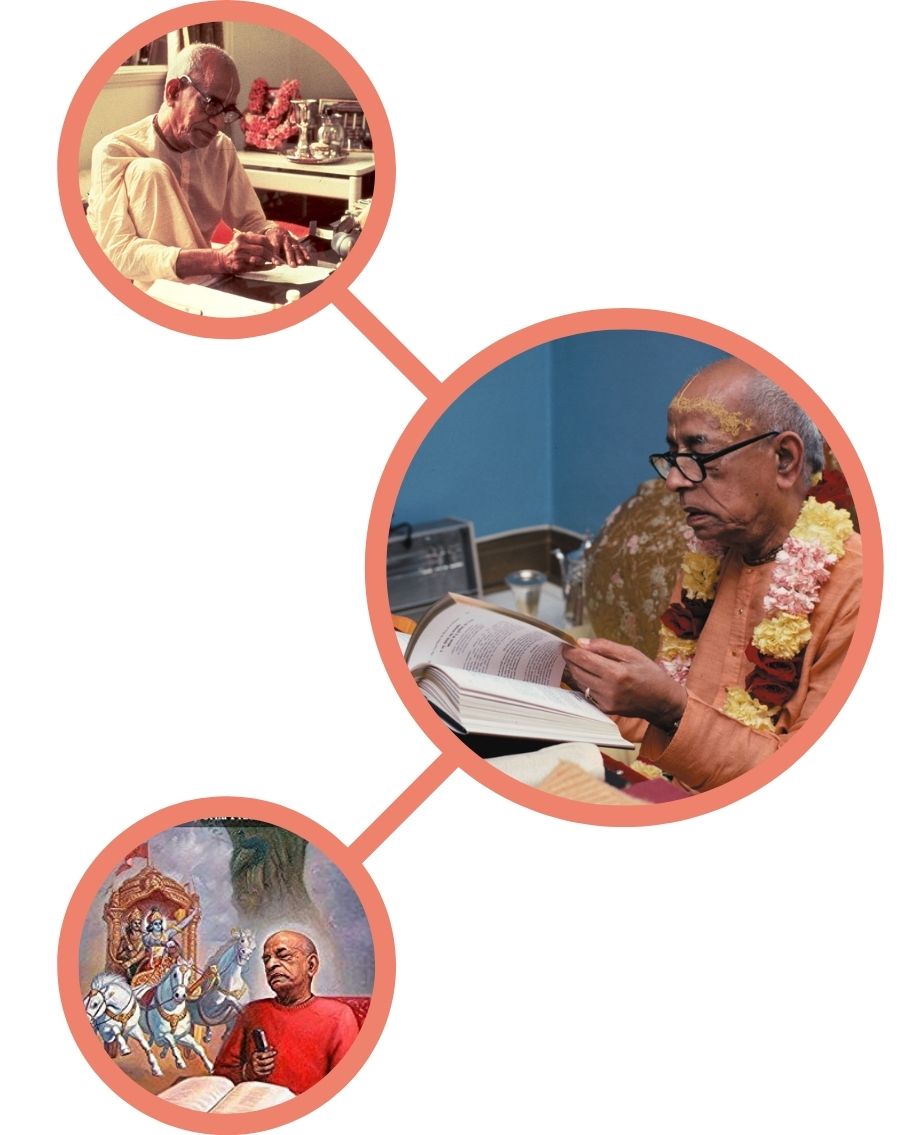 Srila Prabhupada stimulated the construction of a large international center at Sridham Mayapur in West Bengal, India which is the best place for Vedic study. However, Srila Prabhupada’s most important contribution is his books.

The academic community highly respected its authenticity, depth, and clarity. His books are even used as standard textbooks in many colleges. His author writings have been translated into 80 languages. To publish his writings, Bhakti Vedanta Book Trust (BBT) was specially established in 1972.

Thus ISKCON has become the world’s largest publisher of books in the field of religion and philosophy. This Book Trust has so far printed and distributed more than crores of Bhagavad Gita. 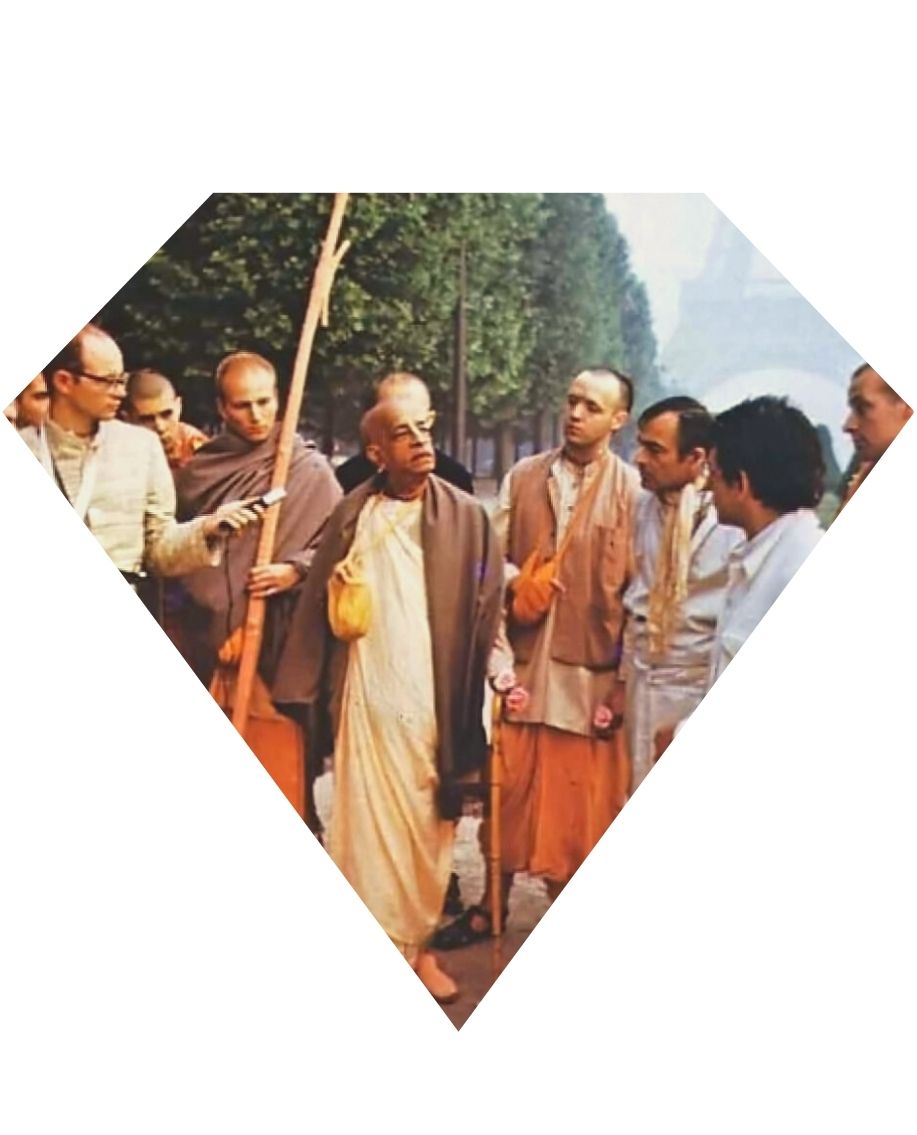 Between 1966 and 1977, he traveled all over the world. During this period, he met world leaders and imparted knowledge to understand Vedic philosophy by giving lectures and interviews. Rarely does such a great man come into the world who does more work than the ordinary person’s thinking. And founder-acharya of ISKCON, His Divine Grace
A.C. Bhaktivedanta Swami Srila Prabhupada was one of them.