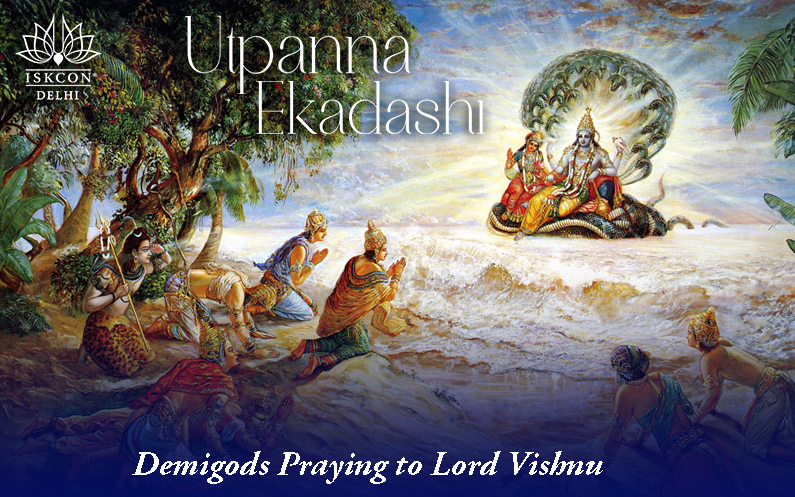 Lord Krishna told the importance of the Utpanna Ekadashi fasting to his childhood friend Arjuna in the Bhavishya Purana.

Arjuna told Lord Krishna that why you have declared this Ekadashi as the most sacred among all pilgrimages, please explain to me in detail.

Then all the demigods like Indra went to Lord Shri Hari & started praising Lord Vishnu, O Shri Hari, and you are the Lord of all the three worlds, you are the savior of the whole world, that’s why we have a lot of respect for you. We all are in Your shelter; you protect us from that terrible demon, and because of the atrocities of that demon, we all have come under your protection; please save us from that monster in any way. All of us have been expelled from Devloka by that demon. That’s why we live our lives in the world of death, facing a lot of suffering due to the fear of that demon. That is why, Jagannath, you protect us.

In this way,after  praised by demigods, Lord Vishnu asked, please tell me which is such a terrible Demon, due to which this situation has happened to you.

Hearing such words of ShriVishnu, Devraj Indra said, that O Lord, this is an Asura named Nadijangham, who was born in the Brahmavansh in ancient times. This demon has a son named the Mur who resides in the city named Chandra Vati. It is so fierce and powerful that it has conquered death in the entire Devloka by its strength. By removing all the demigods from Devloka, he has made the demons of his Daitya clan as Indra Niyam Varun Moon, etc. And by becoming the Sun himself, the earth gets austerity in the strong sunlight and the form of a cloud. He rains vital water on the people of the planet. That is why God save us from this terrible monster.

After listening carefully to all the words of the demigods, Lord Shri Hari urged all the demigods to accompany me to the city of Chandravati. That demon named the Mur had already known the words of the demigods and Lord Shri Vishnu before his brilliance. Lord Vishnu was coming to the battlefield with all the Creators to fight the war with that demon. Then there was a fierce battle between the demigods and that demon, due to which all the demigods became more and more afraid. After that, Lord Shri Krishna himself had to fight the war on the battlefield, and He fought with that demon for 100 years. But Lord Vishnu had to conquer him because of the Leela of that demon. In the end, he entered a cave named Hemavati, 38 km long, located in the Badrika ashram for rest. 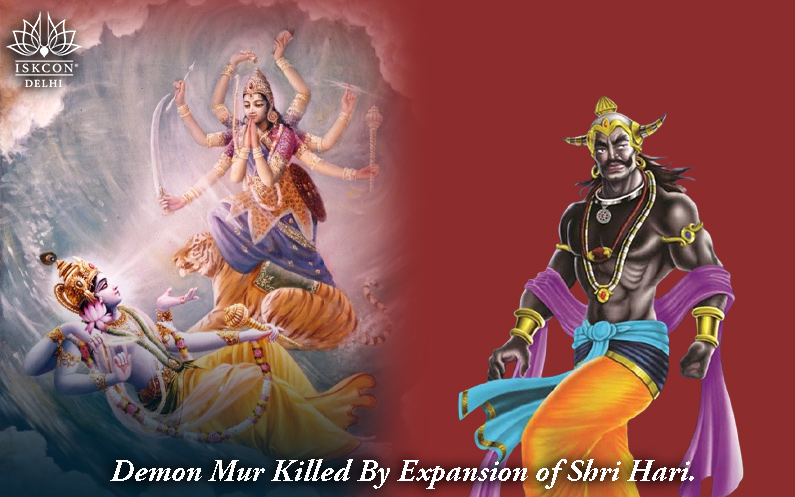 As soon as the Lord went to rest in that cave, a demon named Mur also followed him. Seeing Lord Vishnu sleeping, the devil planned to kill the Lord.

But he could not succeed in it.

At the same time, a beautiful women appeared from the body of Lord Shri Hari in the form of Mohini.

That stunning women pushed that demon unconscious and severed his head from the body. Just as soon as he fell on the earth, the demon attained the world of death. Seeing the end of their king like this, all the remaining Asuras fled away.

After that, Lord Shri Hari Vishnu got up from his sleep, seeing that demon dead. He was shocked at who killed this terrible monster. Then that women pleaded with folded hands in front of Lord Shri Hari and said that Lord, this demon was ready to kill you. Then I, born from your body, killed this demon. Lord Shri Hari was pleased with him and said that you had killed this terrible monster. That is why I am pleased with you. You have got the demigods of the three peoples relieved from their sufferings; that’s why I will fulfill your every wish, whatever the boon you want to ask.

The supreme personality of Godhead said,You were born from my body on the day of Ekadashi; that’s why your name will be known as Utpanna Ekadashi in the future. Whoever observes a fast on this Ekadashi will be freed from all the sins of this world; saying this, Lord Shri Hari disappeared from there.

Then Lord Krishna told Arjuna that he was the son of Pandu. In this way, the fasting of Ekadashi is the best and most fruitful fast of the festival. By observing this Ekadashi fast, a person also attains salvation. All the creatures who observe Ekadashi, the best of all the fasts, will attain salvation in the end after enjoying worldly pleasures. That is why everyone should do this Ekadashi fast without worry. And on the day of Ekadashi, one should remember Krishna.

We readers are very very thankful to you as you always post such great articles about each and every Ekadashi for us.