The disappearance of Srila Prabhupada 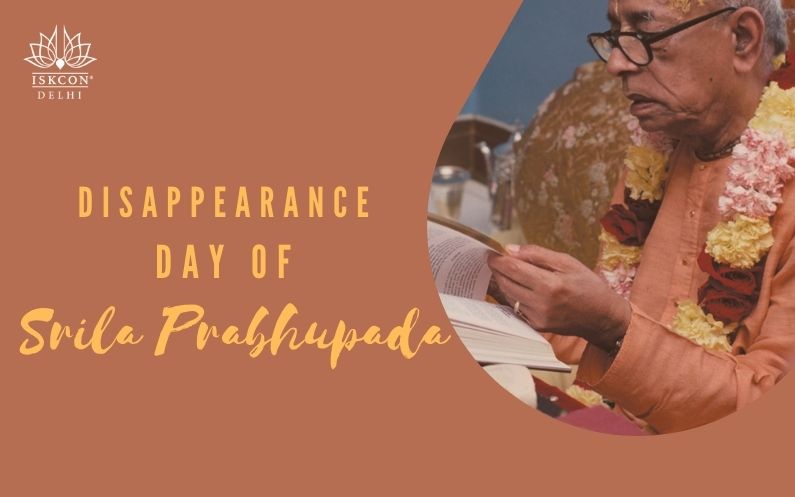 “I offer my respectful obeisances unto His Divine Grace A. C. Bhaktivedanta Swami Prabhupada, who is very dear to Lord Krishna, having taken shelter at His lotus feet. Our respectful obeisances are unto you, O spiritual master, servant of Bhaktisiddhanta Sarasvati Gosvami. You are kindly preaching the message of Lord Caitanya deva and delivering the Western countries, which are filled with impersonalism and voidism.”

The disappearance day of His Divine Grace A.C. Bhaktivedanta Swami Prabhupada (the founder-acharya of the International Society for Krishna Consciousness) allows us to meditate on his pastimes and his teachings. Srila Prabhupada had this to say about the disappearance of vaisnavas:

So he sat down on the staircase from where she was going to exit, and he stayed there for five hours chanting the Holy Name and then in the evening when she was going home. She saw Prabhupada was sitting there. She asked her secretary who is this, Swamiji, and he replied that Swamiji was from Vrindavan. Then she gave an appointment to Srila Prabhupada for the next day. She agrees to pay for the printing of the whole Srimad Bhagavatam first canto, part three. So this example shows that how determined Srila Prabhupada was.

Finally, when Srimati Morarji agrees to facilitate Srila Prabhupada trip to America. He would walk from the residence of the Sindhiya company to Andheri station 3-4 km every day just because he did not have money for bus fare. So we see how Srila Prabhupada made so many sacrifices to establish this Krishna Consciousness movement, and Srila Prabhupada opened Vaikuntha temples worldwide.

He has to go through the great austerities, for example. When he was living at Radha Damodara temple, he would take a Tonga (a light horse-drawn two-wheeled vehicle used in India) and go to Mathura, travelling in the third class compartment and then reaching Delhi. He proceeded to mission getting books printed and also distributed. He visited different libraries to distribute Srimad Bhagavatam sets and started to publish Back to Godhead magazine. And He visited coffee houses, clubs, restaurants to distribute these Back to Godhead magazines and one day while distributing these books magazines in the heart of Delhi, Connaught Place. He fainted due to sunstroke, but he again resumed book distribution when he came back to consciousness. So Srila Prabhupada taught by his example the importance of book distribution.

Srila Prabhupada went to Russia for five days which was known as the Soviet Union in those days. Thus, Srila Prabhupada planted the seed of Krishna Consciousness that is continuing to grow.

He was determined to serve Krishna. Once in New York, he was not well, and the devotees were advising him to go and take rest in Gita-Nagri. Srila Prabhupada looked at the moment and said, “Please don’t take away my privilege to struggle for Krishna. So Srila Prabhupada struggled to establish this Krishna Consciousness movement.

Even when He was physically not too well, he did not stop his preaching. In the last days on the planet, when he was in Vrindavana, he was so weak that he could not even sit down. He could barely speak, but he had a devotee who read out the Sanskrit had another devotee reading of the commentary of the acharyas. Srila Prabhupada was whispering the translation and purport. This shows us how compassionate Srila Prabhupada was and how determined he was to save humanity.

Srila Prabhupada said in his last days, “As long as Book distribution goes on, I will never die”.

So on this auspicious day, we should glorify him. We should remember him. We should beg mercy at his lotus feet, cry for his mercy. We should dedicate ourselves to following Srila Prabhupada’s instructions than “vaisnavera krpa paya sarva siddhi.”

If we can get the mercy of such a Vaisnava sadhu, we will achieve the perfection of our life and make spiritual advancement.