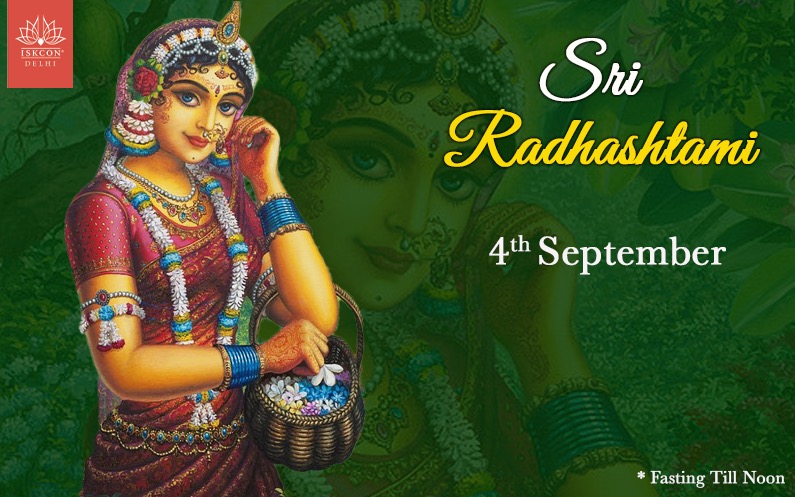 Sri Krishna is the fountainhead of all incarnations. Similarly, Radharani is the source of all goddesses such as Laxmi Ji, Rukmini Ji and Satyabhama. She is the ultimate source who serve with endearment to the Supreme Lord in both the material and spiritual world. When in someone’s heart there is a flow of Krishna’s love, devotion and rasa then it becomes a shrine. When Triveni of love, devotion and rasa flows in someone’s heart, that gesture is known as Radha Bhava. This surpassing devotion and love for Krishna are known as Radha bhava in the heart.

The story is of when Nanda Baba and mother Yashoda lived in Nandgaon, and Vrishbhanu and mother kirtida Lived in Barsana. Both families were very close and intimate friends of each other. Both the couples were not blessed with a child at that time. So, Nandbaba and Maharaj vrishbhanu decided to settle at the bank of the holy river Yamuna. Yamuna Ji is very loving and kind. So, on staying close to her at the bank of river Yamuna, we will unquestionably be blessed with the child. So, in this way, Nandbaba got settled at the sacred land of Gokul and Maharaj Vrishabhanu at Rawal.

Later, Krishna appeared on Ashtami tithi of Bhadrapada month of Shukla Paksha. We celebrate that momentous day as Janmashtami. On Ashtami tithi of Bhadrapada month Vrishabhanu Maharaj went to take a dip at the pond during dawn which is known as Arunodaya Bela he noticed a dazzling light. That gratifying light was pleasing his eyes. When Sri Vrishabhanu went near that light, he saw those golden light rays coming from a glaring lotus. When he went close by, he noticed that the sparkling light was not coming from that bright golden lotus. It was coming from the utmost beautiful girl present inside it.

On watching that girl, Vrishabhanu Maharaj’s love strings were overflowing. Brahma Ji appeared at that time, and one prophecy occurred.

Prophecy – You did severe penance in previous births to get the internal potency of Supreme Lord Krishna in the form of a daughter.

Srimati Radharani is appearing as your daughter. So, you take Her to your house and do Her upbringing. On hearing this, Vrishabhanu Maharaj, being pleased, took her to his house. But after reaching home, he noticed that the girl neither opened her eyes nor spoke or listened to anything. He got upset.

Then Narad Muni comes there disguised and asks him to celebrate the appearance of Shri Ji herself on the attainment of Kanyaratna.

Everyone was indulged in their work. That time baby Krishna crawled and came near Radha rani. With the support of the cot, he stood near Radharani and touched her. As soon as he touched Radharani with his sacred hands, Radharani opened her eyes and started crying. On hearing Radharani’s screech, everyone spurted. Vrishabhanu Maharaj and Kirtida were delighted that their daughter could speak, see, and listen.

Conversation Between Lord Sri Krishna and Srimati Radharani at Goloka

At Goloka Vrindavan Dham, Lord Sri Krishna said to Srimati Radharani :
Hey Sakhi, it’s time to appear on the earth. Radharani answered that if Sri Vrindavan Dham, Govardhan and Sri Yamuna Ji were not present, I don’t want to go there. On hearing this, Lord Krishna replied I knew it, so I already sent some part of Vrindavan Dham, Govardhan and Yamuna Ji together to the material world. So, you can stay there forever. Then Radharani replied I have one more issue to discuss. Until the time I get sight of your face, I will neither watch anything nor hear or say anything. So, she was waiting for Shri Krishna.

The main aim of our life is to surrender unto the Supreme Lord Sri Krishna’s lotus feet. Therefore, we should have dedication, concentration, determination to serve Lord Krishna and the best example is Radharani. Lord Sri Krishna himself came to this world 500 years ago to show the love and devotion of Radharani to people. To spread it, Sri Krishna appeared as Sri Chaitanya Mahaprabhu and propagate Harinam sankirtan.

According to Srimad Bhagavatam, in Kaliyuga, the best and easiest way to uplift humankind is Harinam sankirtan.

So, In this Radha Ashtami, let’s get a unique darshan of Sri Krishna and Srimati Radharani. Along with it, adopt the maha-mantra which is itself given by the lord as an essential part of our life.

There is nothing more important and influential than this maha-mantra given by Supreme Lord Sri Krishna itself. And to spread it for the benefit of people, He came to this world.

So, let’s chant the Hare Krishna maha-mantra on this Radha Ashtami to get the blessings of the most loving, tender-hearted Radharani.