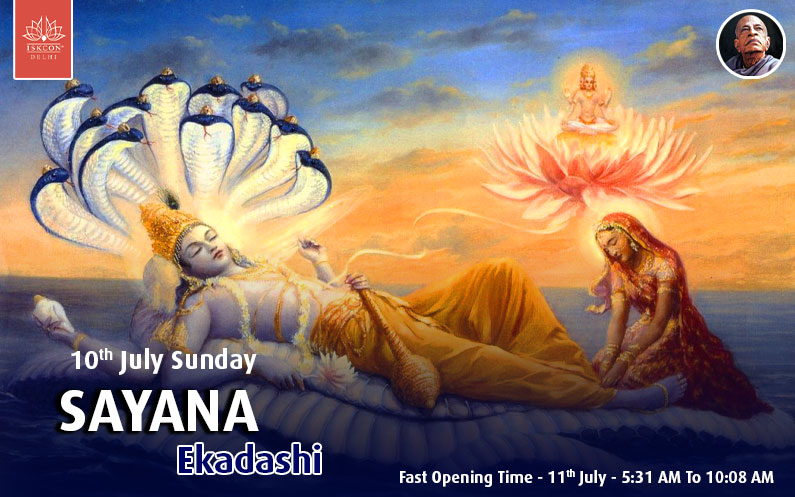 According to Padma Purana, the worship of Lord Vishnu on Shukla Ekadashi of the month of Ashadh has special significance because on this day the sleep of the Lord begins.

According to Vedic texts, the sleep of Lord Hari is also called Yoga Nidra. On this day, Lord Mahavishnu falls asleep in Ksheersagar.

Chaturmas, which is the four-month period of self-control according to the Hindu Calendar, begins from Devasayani Ekadashi itself.

The Great Legend behind Sayana Ekadashi

Once Yudhishthira Maharaj asked Supreme Lord Krishna, “O Keshav, what is the name Ekadashi coming in the Shukla Paksha of the month of Ashadha.

Who is the worshipable deity of this day? And what is the method of observing this fast? Tell me in detail, tell me, everything Lord.

Once asking the same question to Lord Brahma of  Devarshi Narada, O’King replied that the Ekadashi which falls in the Shukla paksha of Ashadha month is also known as Sayana or Devshayani or Padma Ekadashi.

Supreme Lord Hrishikesha, the master of the senses is the presiding deity of this day;  that’s why festivals are held for their happiness, and devotees should observe this fast.

In the past, a king named Mandhata was born in Raghuvansh, He was the appointed emperor of the earth; they used to follow the leaders of the truthful kings, powerful, mighty subjects as their children.

There was never any flood, drought, or famine in his kingdom. There was never any disease. Everyone was living happily and healthy, but after some time, maybe from Godly or maybe sinful deeds, there is no rain for direct three years.

People started starving due to lack of rain, all of them, distraught with sorrow, requested the King that O king, you always see our welfare, so we humbly beg your assistance now.

Thus, we are all miserable, O King! Please find some resolutions to this problem, and bring us peace and prosperity all over again.

Hearing this, the King said that it had been said in the Vedas and Puranas that such a situation arises only because of the King’s sinful deeds. But I do not know what crime I have committed.

Yet I will try to benefit my subjects; having said this, the King and his officers and soldiers saluted the brahmins and proceeded toward the forest. After entering the forest, he visited many ashrams.

One day he, fortunately, met Angira Muni; Angira muni was the son of Brahmaji and very intelligent.

Seeing them, the sense controlled King Mandhata immediately dismounted his horse and offered his respectful bowed to him.

When the sage inquired about the King’s arrival, the subjects, then King, said that I am ruling with righteousness and maintaining my kingdom while following the Vedic injunctions.

Thus, I don’t know why there has been no rain in my kingdom for three years, and I need to understand why? O Gurudev! To solve this mystery, I have requested you for help, and please help me reduce the difficulty of my subjects.

Then Angira Muni said that the present era is the best of all ages; everyone respects Brahmins as the topmost member of society in this age.

Only Brahmins have the right to perform penance, although there is one ‘Shudra’ who is unlawfully performing the rituals of austerity and penance in your kingdom.

You should bring happiness and prosperity to the state by killing him. Hearing this, the King said that I couldn’t kill a sinless person engrossed in penance; please suggest any other simple solution.

Then, Angira Muni replied that you and your subjects should observe the holy Devsayani Ekadashi in this situation.

Following this, there will be rain in the state; Ekadashi falls in Shukla Paksha the month of Ashadha.

By observing this fast, person is freed from all the sins and all the obstacles in the path of attaining his final goal.

Therefore, O king! It would be best if you observed this fast with your family and subjects.

After hearing the words of Angira Muni, the King returned to his kingdom united with his family and subjects.

It occurred this fast due to its effect. There was rain everywhere in the kingdom, and the kingdom was again prosperous and flourishing. And the people were also pleased.

In this way, Lord Hrishikesha is pleased with the observance of fast and the statement of the person who observes the fast.

All the sins that have been prone are destroyed.

This is the Glory of Sayana Ekadashi

On this Ekadashi, devotees throng to see Lord Sri Vitthal in Pandharpur, Maharashtra. All the nearby village devotees make groups and go to see Lord and see him divine.

If we come back after holding a beautiful form in our hearts, then all of us should also keep this simple and dear to Supreme Lord means Ekadashi and save it as much as possible to remain firm on the path of Bhakti.

One should keep on hearing, chanting the Hare Krishna Maha-Mantra, and one should try to attain the transcendental loving devotional service of the Supreme Lord.

Thanks for the whole thing.Hare krishna

Hello iam Raghav I am 13 years old and I do 1 mala krishna japa and sometimes 2 kalki japa but I do atleast 1 kalki mala and I want to meet HG Amogh lila prabhu if prabhu ji you are reading this then plese reply me . Hare krishna jai kalki.

Hello iam Raghav I am 13 years old and I do 1 mala krishna japa and sometimes 2 kalki japa but I do atleast 1 kalki mala and I want to meet HG Amogh lila prabhu if prabhu ji you are reading this then plese reply me . Hare krishna jai kalki.

Tirth (Trying To Become A Devotee)

Sushma Joag
Reply to  Tirth (Trying To Become A Devotee)

It is mentioned that Sri Vishnu Bhagwan sleeps during this time. What is the significance behind this and what is the Period of Sri Bhagwan’s sleep?