Discover the Meaning and Significance of Saphala Ekadashi 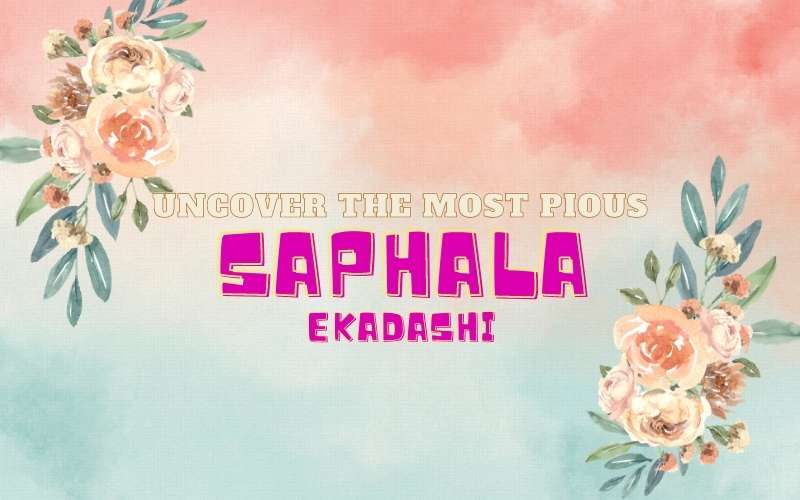 Uncover the blessing of Saphala Ekadashi. The spiritual act of fasting is being preached by every religion, and in the same manner, Ekadashi holds value as per the Sanatan Dharma. The purpose of fasting on this auspicious day is not to trouble the material body, but to devote and utilize this holy day entirely to the devotional services of Lord Shri Krishna, and it is extremely beneficial to read and listen to the glories of Ekadashi vrat for this purpose.

As per Bhavishyottara Purana, once Maharaj Yudhishthir requested Lord Shri Krishna to explain “how one should observe fasting on Posh Masa, Krishna Paksha Ekadashi, and which demigod is to be worshipped on this day?”

And those who observe this fast with complete devotion can please me in all terms. Posh Mas, Krishna paksha Ekadashi is also known as Saphala Ekadashi, and the fast is to be observed by showing a lamp and offering fruits to Lord Shri Narayana on this day, followed by listening to Lord Shri Narayana’s glories.

Once upon a time, there was a vast kingdom of Champawati ruled by Emperor Mahishmata; he had four sons, the eldest of which was Lumpak, but sadly, Lumpak was the greatest sinner of all—continues Lord Shri Krishna. Lumpak used to indulge in many malpractices, like forcing other people’s wives into courtship, he was a non-vegetarian, used to gamble, and he was envious of all others. He used to criticize Brahmins and Vaishnavas, and because of his malpractices, his father was becoming poorer day by day. The emperor was now able to make out that his son must not be forgiven, and he banished Lumpak from his kingdom. But Lumpak thought that as I had been banished by my father, I would spend my days hunting animals for flesh and plunder people at night, which led to increasing his sinful life over the years. He used to start his day with malpractices and end it similarly.

Now comes Saphala Ekadashi, he was sleepless the night before owing to an intense cold. The following day he wasn’t able to wake up in time because of ill health, he didn’t even hunt for food that day. So he collected fruits from the nearby trees and sat under one of the trees then he requested Supreme Lord, “Oh Lord Hari, please be merciful to me and accept these fruits”, in this way unknowingly he observed the fast on Saphala Ekadashi and offered fruits to Lord Shri Hari.

Supreme Lord is so merciful and kind even if someone (being sinful or not) observes the fast of Ekadashi and offers the offerings that would easily attain his mercy.

That way, Lumpak was able to please Lord Shri Hari, who blessed Lumpak with a boon. The next morning, a white horse stood before his house, and then a celestial voice was heard, saying, “By the mercy of Lord Vasudeva, Lumpak is now free from all sin and has got his kingdom again, as he has observed fast on Saphala Ekadashi.” This changed his life altogether, he returned back to his kingdom and took charge with the permission of his father, becoming an exultant devotee of Lord Shri Krishna. Lumpak delegated all the responsibilities and distributed his wealth among his sons in old age and devoted the remaining days of his life to the devotional services of the Supreme Personality of Godhead. After this, leaving behind all of the material desires and the material body Lumpak returns back to the heavenly abode of Lord Shri Krishna.

So by this story, one can better understand that although Lumpak had committed several mistakes but just by observing this fast and by involving oneself in the devotional services of Lord Shri Krishna he was able to attain salvation.