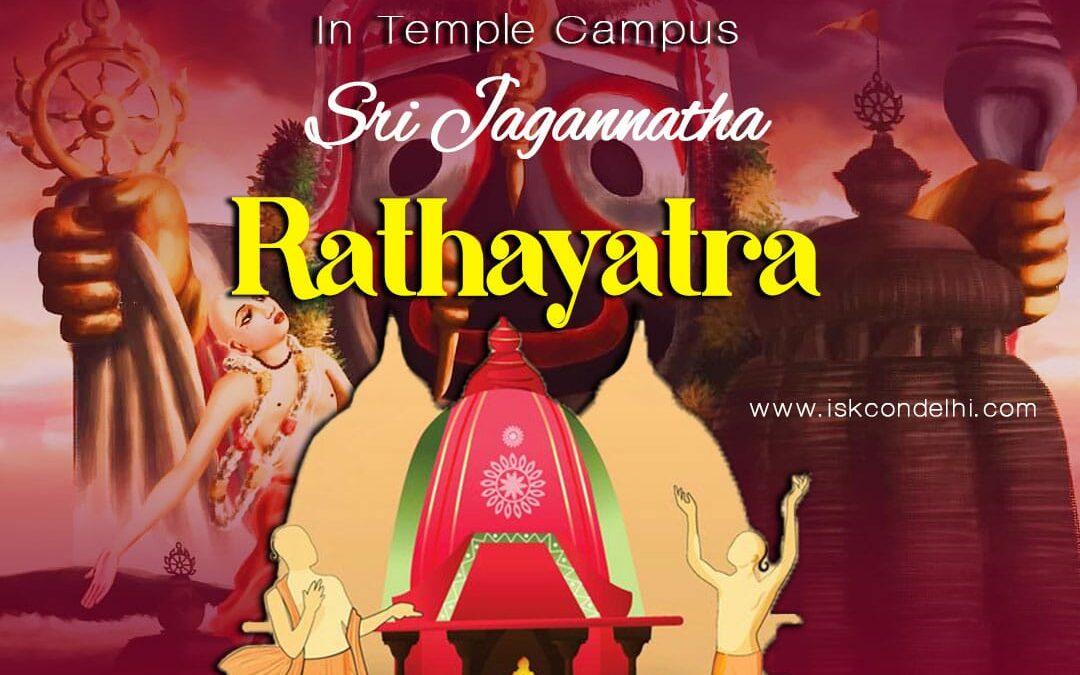 The path to Supreme Lord Krishna’s devotion is filled with joy. And when we lose our way to this delightful and blissful path, then Lord Krishna reappears on the earth from his eternal abode. He always wins our hearts with his Divine Play, like his name ‘Krishna’, which means ‘all attractive’.

He always rules our hearts with his divine qualities. With his causeless mercy, Lord wants us to meditate on his lotus feets rather than this materialistic world. This causeless mercy of Lord Krishna is signified in the form of the marvellous event ‘Lord Jagannath Rathyatra’.

However, it is celebrated worldwide due to the devotional flame of Srila Prabhupada, the founder-acharya of ISKCON. Going beyond the geographical and cultural boundaries, the Rath Yatra festival signifies the meaning of spiritual love and devotion.

The anecdote behind the appearance of great Lord Jagannath is as pleasant as the context of Rath Yatra. In many temples, during Shobha Yatra, all the Deities are brought out of the temple. But downright, the purpose of Lord Jagannath is always different whenever he comes out of his temple.

Lord Jagannath is so merciful that he comes out of the temple to bless the people, especially those beings who are engrossed in material gratification and cannot pay a visit to the temple for Lord darshan. Lord Jagannath’s compassion for devotees is unmatched.

Many years after the departure of Supreme Lord Krishna from Vrindavan, the gopis meet Shri Krishna in Kurukshetra.

Many people from far-flung had gathered in Kurukshetra on the occasion of the solar eclipse. Gopis had an intense yearning for Shri Krishna the moment they met him. But gopis wanted Shri Krishna to spend time with them in the Kunj of Vrindavan rather than Kurukshetra. So gopis built a chariot in their minds, and began pulling it by their love and hands rather than by horses.

Thus, there is fervent love of the gopis in the Rath Yatra. The Rath Yatra signifies Kurukshetra as the starting point and the Vrindavan as the destination.

It is believed that during Rath Yatra, we help the gopis in their love and labor while pulling the chariot of the Lord. The intensity of devotion in our hearts can also be felt while helping the gopis who are full of devotion. Pulling Shri Jagannath’s chariot affectionately signifies taking him to Vrindavan and inviting him again to our hearts.

On the Dwitiya of the month of Ashadh, Lord Jagannath comes out of his main temple in Puri and travels to the house of his mausi (aunt) Gundicha. Thousands of people assemble on the way for his darshan and pull the chariot.

In Puri, Lord Jagannath is worshipped along with his elder brother Baldev and sister Subhadra. All the three brothers and sisters go there to their respective places with great pomp. The Yatra starts with conch, trumpet, dhol, and drums.

How Pilgrims Recognize Chariots of Lords?

Pilgrims recognize each chariot by seeing the various symbols and signs of the three chariots. Lord Jagannath’s chariot is of red and yellow colour consisting of 16 wheels whose deity is Shri Narsingh. This chariot is known as Nandighosh or Garudadhwaja or Kapiladhwaja.

According to tradition, the king or the high-grade officer of the kingdom starts the chariot after cleaning the road ahead with humility and honour. All three siblings delight in Gundicha temple just like they do in Kunj of Vrindavan. Far away from the hustle and bustle of the city and the countless servants of the temple.

On the Panchami of Ashadh Shukla Paksha (known as Hera Panchami), Goddess Lakshmi visits Gundicha temple to meet Lord Jagannath. But due to not getting darshan, she breaks a part of the chariot out of anger and comes back to the main temple. The Lord returns on the ninth day of the Rath Yatra, and Goddess Lakshmi meets the Lord with her servants. To appease the goddess, Lord Jagannath presents his garland to her.

Eventually, Lord Jagannath returns on the day of Dwadashi. Showing her anger, Goddess Lakshmi shuts the door. But she opens the door after Lord accepts his defeat.

In this way, Puri’s custom Rath Yatra is executed which is meant for bringing people close to Supreme Lord. This Rath Yatra takes out the divine love of the Supreme Lord from the temple and sprinkles it not only in the whole town but in the entire world. It gives us an opportunity to take our devotional love from separation to union.

It’s all because of the deep devotion His Divine Grace Abhay Charanarvinda Bhaktivedanta Swami Srila Prabhupada, founder-acharya of ISKCON, that this festival has become worldwide. ISKCON held the first Ratha-yatra festival abroad in 1967 along the streets of San Francisco and sanctified its soil.

Today, other than India, the Rath Yatra of Lord Jagannath is taken out in every corner of the world, including London, France, Germany, Boston, and Australia. Due to which many people are moving on the path of devotion to the Supreme Lord. Lord Jagannath Rath Yatra is organized in all the temples of ISKCON with great enthusiasm.

After the Rath Yatra, the mahaprasad of Lord Jagannath is also distributed to the devotees. If they receive it with reverence, the devotees will indeed receive his blessings. Therefore, all of us should be a part of this event and invite the very kind and pious Lord Jagannath into our hearts.

A special Rath Yatra Festival is organized at ISKCON Delhi every year. A huge procession is carried out on the streets of Delhi amid the roaring kirtan.

Devotees perform the sacred maha-mantra and dance. Then, thousands of devotees pull the rath of the Lords to get mercy. It is an intriguing sight and a joyful experience.