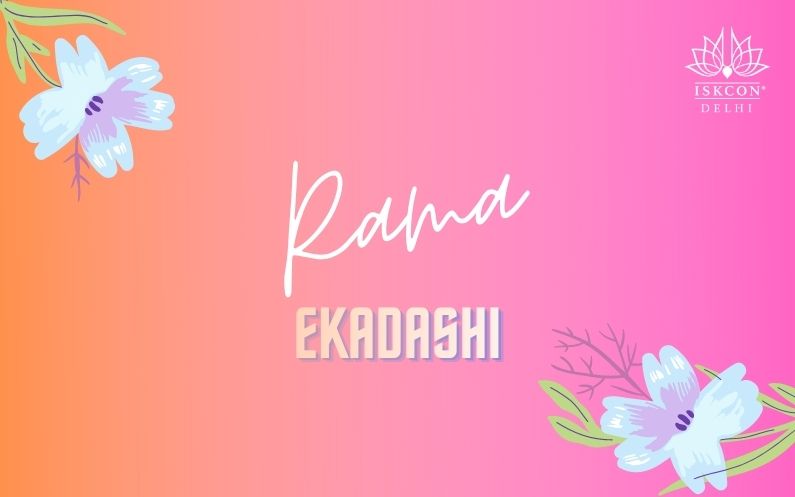 The importance of Kartik month is broadly mentioned in Skanda Purana. In terms of fasting and austerity, this month is considered most auspicious, pre-eminent and rare. According to Padam Purana, on keeping fast on Ekadashi, which falls on this bright day, people get saintly, and all his desire come true.

Once Yudhisthira asked Lord Krishna, Hey Janardhan, which Ekadashi falls on Krishna paksha of Kartik month and the importance of this Ekadashi? Kindly elaborate.

Hey Rajan, Ekadashi, which falls on Krishna paksha of Kartik month, is known as Rama Ekadashi. It is considered as most sacred and fortunate Ekadashi. On keeping fast on this Ekadashi, a person can get rid of all the sins of this material world. So one can attain a spiritual world at the end of his life. Now I will describe to you one story. By saying this, Lord Krishna started telling Rama Ekadashi Katha.

Many years ago, a great and mighty king named Muchakunda ruled in this world. He was a friend of Indra dev, Varun dev, Yamraj etc. Along with it, he was a great devotee of Supreme Lord Krishna. As he followed Vedic principles, his kingdom was spilling with happiness and prosperity. The people belonging to his empire were happy and satisfied. King Muchakunda had a beautiful daughter named Chandrabhaga. When she grew up, king Mukuchanda’s daughter got married to the son of Chandrasena named Shobhan. They were happily leading their married life. Suddenly a mishap happened.

Once Chandrabhaga came to her father’s house. Then, after some days, Shobhan came to his in-law’s house on the auspicious day of Ekadashi.

But the problem was on his arrival, Chandrabhaga was worried because she knew that her husband was physically very weak and unable to bear the austerity of a day-long fast. He will not be able to handle the complete fast of Ekadashi as he is physically unwell.

Chandrabhaga conversation with her husband, Shobhana

Chandrabhaga said to her husband, my father is very stern regarding Ekadashi fast. A day before Ekadashi on Dashami tithi, my father informs people of the complete state that no one will have food on the day of Ekadashi. But by perceiving your condition, I am worried about how you will be able to keep this Ekadashi fast. At the same time, the same announcement was repeated by the king’s men.

Shobhana’s Reply: Hearing this, Shobhana said To His Wife. Hey Priye! Please tell me, how can I save my life and astonish your father?

Chandrabhaga’s reply: Hey, swami! In my father’s house, not only humans, even all the living beings in our place keep Ekadashi fast. On this day, no food is provided even to elephants, horses, or other animals of our kingdom. In this condition, how can you stay here without keeping fast? So if you want to save your life, you have to go from here immediately. Now with complete determination, you decide what you want to do.

Shobhan’s Resolution: Prince Shobhan heard Chandrabhaga with total concentration. In the end, he said I would surely keep fast on this auspicious Ekadashi. Whatever is in my fate, Thus will indeed happen. In this way, Sobhan kept Ekadashi fast the next day. But due to illness, he was unable to bear hunger and thirst. Anyhow he spent the whole day. Devotees of lord stayed awake full night and, with complete devotion and enthusiasm, chanted lord’s name and did kirtan. But that night was very tough for him to pass. His health condition was deteriorating every second.

Consequence Of Fasting on Shobhan’s Life:

At the end of Dwadashi early morning, Shobhan’s soul left his body. The whole kingdom got immersed in grief. King Muchakunda made all arrangements for the last rites of prince Shobhan. He gave mukhagni to his son in law. The king denied his daughter to go along with her husband at the funeral. After her husband’s demise, Chandrabhaga started to live in her father’s house. Even though Shobhana died due to Ekadashi fasting, but after his death, he went abode and became ruler of a kingdom high on the peak of Mandrachal mountain. His kingdom was dazzling like demigods. The walls of his building were made of diamonds and jewels. The king sat upon a throne wearing a gold crown. Gandharva and Apsaras were serving him. By observing his generosity, it was resembling as second Indra.

One day a strange thing happened, a brahmin who lives in Muchakunda’s kingdom named Soma Sharma. While travelling to various places of the yatra, they reached Shobhan’s kingdom. When brahmin saw Shobhan and his prosperity, he was highly shocked. He knew that it was not other than Shobhana, the Chandrabhaga’s husband.

Shobhana’s Response: When Shobhana saw the brahmin there, he immediately rose and greeted him. Later on, he enquired about king Mukuchand and Chandrabhaga’s well-being to Som Sharma.

Som Sharma’s reply: Hey Rajan, everything is well in your father-in-law’s kingdom. Chandrabhabha and your other family members are also quite well. Throughout the kingdom, there is happiness and prosperity. But by finding you here, I am pretty astonished. Kindly tell me how you reached here?

On hearing this, Shobhana started to tell the whole story in detail to him. Shobhana said because I followed the Ramaa Ekadasi fasting, I was given this splendid city to rule over. But this entire kingdom is temporary. So I request you to tell me how I can make this permanent.

On hearing, this Som Sharma asked why this place is temporary? If you can explain it in detail, then I will surely help you.

Shobhan replied: Hey Brahmin Dev, I followed Rama Ekadashi but without faith. As a result of this, the kingdom which I got is temporary. You see, this is only a transient city, a place of this material world. How may I make its beauties and glories permanent? Kindly reveal this to me by your instructions.

On hearing Sobhanas word Som Sharma’s immediately reached king Muchakunda’s palace. But, on hearing the Brahmins word, Chandrabhaga was unable to believe her fate. So she said, “hey, brahmin dev, Is it true, or is this a dream?”

Bahrain’s reply :O Princess, I have seen your late husband face to face whose opulence is similar to Indra’s heaven. He only asked me to give you this message. Though that kingdom is full of pleasure and wealth, his kingdom is unstable. It can be destroyed anytime. Therefore you find a way to make it permanent.

Chandrabhaagaa said, O brahmin, please take me to that place. I am highly eager to see him again. All the blessings that I have acquired by fasting on every Ekadasi throughout my life, I will give to him. And as a result, I shall make his kingdom permanent. So please reunite us at once again.

Before reaching there, they stayed at the Mount Mandaracala, at the sacred ashrama of Vamadeva.

On hearing Chandrabhaga’s story, Vamadeva chanted mantras from the Vedas and sprinkled holy water on her. Thus, due to the saint’s power, Chandrabhagha’s beauty and body became extremely beautiful.

Meeting Of Chandrabhaga And Shobhana: When Chandrabhagaa reached the kingdom of Shobhan, she was delighted. On seeing his wife Changrabhabhaga, Shobhana was overwhelmed and made his wife sit next to him.

Chandrabhaga Reply To Her Husband “Hey loving husband, now I am going to tell you one secret. Listen carefully. I kept Ekadashi fast with full devotion from the age of 8 yrs. So if I give you all the blessings of my Ekadashi fasting, your kingdom will surely become permanent. It will always be filled with happiness and prosperity until the coming of the great havoc!’.

Chandrabhagas’s Deed For Her Husband

On hearing Chandrabhaga’s statement, king Shobhana became highly cheerful. In this way, Chandrabhaga transferred all her merits of Ekadashi fasting to her husband. As a result, they stayed together, ruled over that kingdom and spent their life with joy and satisfaction for a long time.

After revealing the potency of Rama Ekadashi, Lord Krishna addressed Yudhistira, “hey Rajan, every person should keep fast on Ekadashi, which falls on every month on Krishna Paksha and Shukla Paksha. The person should keep fast with complete devotion and sincerity. A person should not differentiate both the Ekadashi. Just as black and white cows give equally good quality milk, similarly, the Ekadasis of the Krishna paksha and Shukla paksha award the same merit and lift one in spiritual life. It liberates one from the repeated cycle of birth and death.

Anyone who hears or reads Rama Ekadashi’s narration gets freed from all kinds of sinful reactions and attains the supreme abode of Lord Vishnu at the end of life.

So every person should follow Ekadashi, which is most auspicious and awards fast progress in spiritual life.

On the day of Ekadashi, along with fasting, one should chant this maha-mantra as much as possible.

So every person should follow this auspicious Rama Ekadashi of Kartik month and move ahead on the righteous path.

Hare Krishna Prabhuji.
Ekadashi is “Madhav tithi Bhakti janni”
The real purpose of fasting on Ekadashi is increasing one’s faith and love for Krishna. By observing a fast on Ekadashi, we can minimize the bodily demands and engage our time in the service of the Lord by chanting the Hare Krishna mantra or performing similar service.