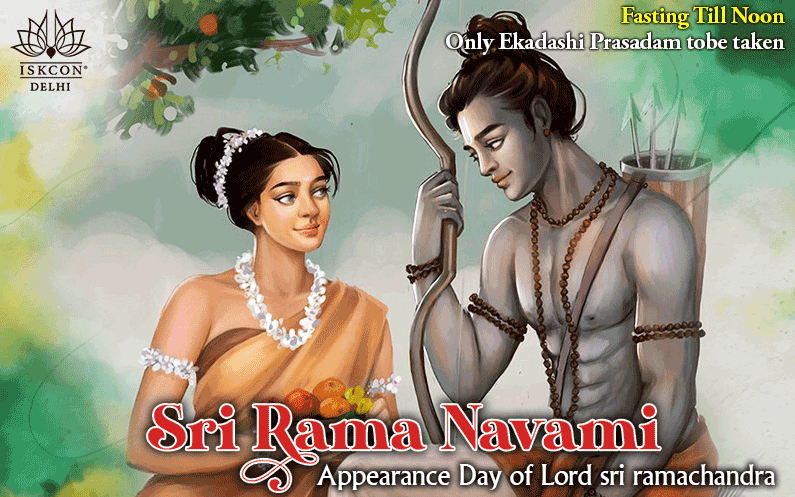 Wishing you all a pleased Ram Navami.

Ram Navami is a very famous festival celebrated throughout India and worldwide by all the devotees of Lord Shri Ramchandra.

It is celebrated on the Navami tithi of Shukla paksha of Chaitra month every year. Lord Shri Ram is the 7th incarnation in the dashavtaras of Lord Vishnu.

He appeared with His three brothers, Bharata, Laxmana and Shatrughna, in tretayuga. They appeared as the sons of King Dasharatha in the Surya dynasty of king Ikshavaku.

BUT WHY DOES GOD INCARNATE?

This curiosity, everyone wants to know, why does God take incarnation? Lord Krishna has answered Srimad Bhagavad Gita. As per BG 4.7

“Whenever and wherever there is a decline in religious practice, O descendant of Bharata, and a predominant rise of irreligion—at that time I descend Myself.”

In the very next verse of BG, Lord says –

“To deliver the pious and annihilate the miscreants and re-establish the principles of religion, I advent Myself millennium after millennium.”

The significance of the Ram Navami festival is that no matter how big the evil is, it has to be defeated by the good. Ravana, who had ten heads, Lord Ram defeated him with one arrow. Lord Ramchandra proved that He is the complete Lord of the six luxuries by killing him.

In Brahma vaivarta Purana, Lord Brahma vividly explained the definition of being the Lord. He said, “One who possesses all Aishwarya or riches, all virya or strength, all Yasha or fame, all shree or beauty, all gyana or knowledge, all vairagya or renunciation is called Bhagwan, the Supreme Personality of Godhead.

This proves that only God Ram is the greatest and the most influential personality in the universe. Therefore the defeat of Ravana was inevitable.

THE STORY OF LORD RAMA IS AS FOLLOWS

According to Bhagwatam Purana, Lord Vishnu had two gatekeepers, Jai and Vijay. Both of them were cursed by the four kumaras – Sanaka kumara, Sanatana kumara, Sanandana kumara and Sanat kumara. As per the curse, both of them had to take birth on earth three times as demons, and they would be the enemy of Lord Vishnu.

Both of them took birth as the sons of Pulasthya brahman. From birth, they were ruthless; they captivated many demigods and demi goddesses.

Seeing all this, Lord Vishnu appeared as the son of King Dashratha.

According to Valmiki Ramayana, King Dashratha had 353 queens. Only three queens were prominent, mother Kaushalya, mother Keikai and mother Sumitra. King Dashratha, who could move his chariot in ten directions, was a great, powerful and majestic king.

However, he was disappointed in his life. He had no son who could become the future king of Raghukula dynasty, which was the reason for his constant despair. Due to this concern, Sage Vashishtha suggested that he perform the Putra kameshthi sacrifice. As a result of that sacrifice, he got a bowl full of kheer prasadam. He distributed that kheer equally among his three queens. Mother Kaushalya was the eldest of his three queens, so she got half portion of the kheer first. While honouring kheer prasadam, she thought that her child should be able to rule all over the earth. As a result, she received Lord Shri Ram in the form of her son.

Mother Keikai also honoured kheer prasadam, and she thought that her child should always follow the path of dharma. Thus, she received Bharata in the form of her son.

Mother Sumitra received two portions of kheer prasadam. She thought that her son should always serve the elder brothers with love and respect. As a result, she received two sons, Laxmana and Shatrughan. They were constantly engaged in the service of their elder brothers.

Lord Rama accepted queen Sita as His wife. Their entire life story is presented in the Ramayana book, composed by Sage Valmiki.

Ramayana is divided into seven parts: 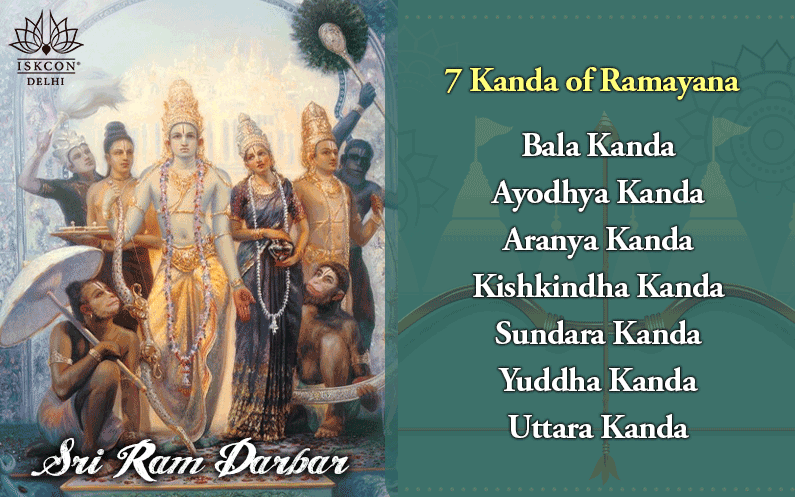 Shri Ramchandra was known as Maryada Purushottam. He taught the whole society how to be an ideal son, an ideal brother, an ideal husband, an ideal friend, an ideal king and an ideal father.

When Ravana kidnapped, mother Sita in her husband’s absence and took Her to Lanka, Lord Ramchandra attacked Lanka with the help of monkeys and brought Sita back. Ravana represented lust, which is just the opposite of pure love. 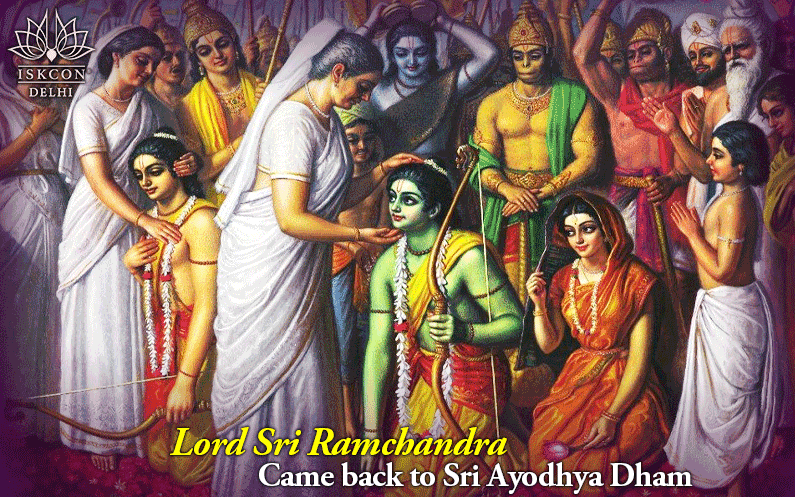 We all should take shelter of Ramnaam on this auspicious occasion of Ram Navami so that all the lustful desires in our minds can be destroyed.