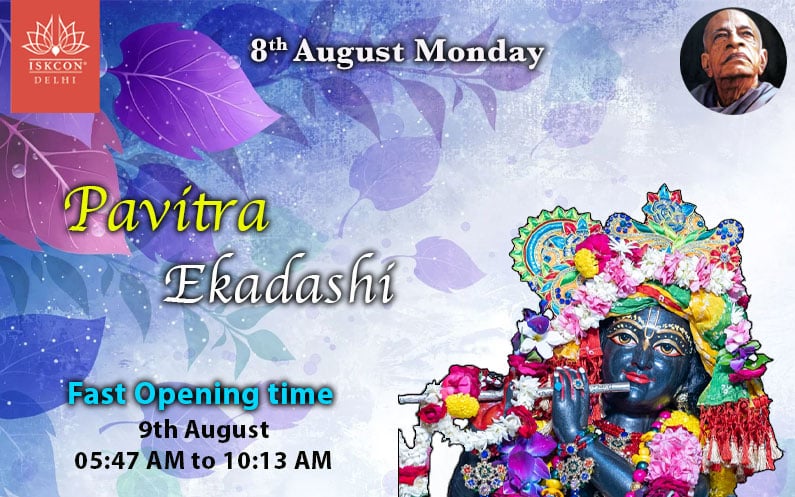 We do fasting several times on different occasions throughout the year. Among all fasts, Pavitra Ekadashi Fast is considered as the superior and most dear to God. This is because keeping fast on Ekadashi leads devotees one step ahead towards the Supreme Personality of Godhead. People of all age groups keep this fast, including women. This auspicious tithi of Ekadashi is also known as Madhav tithi.

That means this auspicious Ekadashi tithi is Janani to rejuvenate bhakti in the life of devotees. Therefore, this Madhav tithi should be followed with Yatna (endeavour). So today, we will acquire knowledge about one of the most sacred Ekadashi.

In Bhavishya Uttara Purana Significance of auspicious Ekadashi is found in conversation of Lord Sri Krishna and king Yudhisthira.

Once Yudhisthira Maharaj asked Lord Sri Krishna:
Hey, Madhusudan!
What is the name and significance of Ekadashi of Sawan month Shukla paksha tithi? Kindly describe it in detail.”

Reply of Lord Sri Krishna: Hearing Yudhisthira’s query Sri Krishna replied that this auspicious Ekadashi is “Pavitra Ekadashi”.Anyone who will listen to the significance of this fast will acquire the sequel of Bajpayee Yagya. Now listen to the story.

The Story Beyond the Significance of Ekadasi

Long ago, at the beginning of Dwapara-Yuga, there was a king named Mahijit. He was the king of a place called “Mahishmati”. He cares for the people of his kingdom as his kids. Once, he invited all the Brahmins and his people to Rajya Sabha. He said he had never committed any sin on anyone. He had never acquired wealth through immoral acts.

King said, he had never committed any injustice on his people. He had never snatched the wealth of Brahmins and deities. In my kingdom, there is an equal rule for everyone. Even on finding any of my relatives guilty, I punished them. I even honoured and paid deserved respect to my spiritual enemies.

Hey Brahmins!
Even after following this spiritual pathway, I do not have a son. So kindly think about this outlook and advise me on the way out.

After hearing this, all the brahmins assembled at a place and thought about it. Then, they decided to donate offerings in various ashrams and ask rishis who know its reason past, present, and future. So, they went to the forest and gave offerings to multiple ashrams. In the end, they reached Lomasa rishi.

Lomasa Rishi was doing long and rigid Tapasya (austerity). His appearance was divine. He was utterly delightful and under strict fasting. He was self-restrained and erudite of shastras. He was glorious and had inestimable hairs in his body. When a Kalpa of Brahma dev occurs, one hair of his body gets detached, so he is known as Lomasa. He has a mystic power and tri-kāla-jñas.

On getting darshan of Lomasa Rishi, the king’s advisers were feeling blessed. They said politely that they are blessed to get darshan of this divine Rishi. They are assured that now their king’s agony will soon end.

Lomasa Rishi’s query: Lomasa Rishi asked, who are you all? Why did you all come here? What is the reason behind praising me?

“Hey, Rishiwar!
Our king Mahijita does not have any son. He nurtured us like his children. His pain is getting unendurable for us. So we came here to do Tapasya. But, we are incredibly fortunate to get your darshan. We are sure that after getting darshan of divine Rishi, we will surely get an outcome”.

“Hey divine rishi! Please tell us away so that our king will be blessed with a son”, said Brahmins. On hearing, this Lomasa rishi starts meditating.

After knowing about King Mahijit’s previous birth, Rishi said, this king was a merchant earlier. For business purposes, he used to wander from one village to another. Once he was very thirsty, and that day was Dwadashi. While searching for water, being thirsty, he found a pond. So he reached at the bank of a pond to satisfy his thirst. He noticed a cow after parturition came with a newly born calf and started drinking water. He immediately stopped her and sent her away.

Later on, he started drinking water. This is the greatest sin done by him. This is the reason he does not possess a son.

Way to rectify his sin: On hearing this, brahmins, the king’s advisers, asked Rishi a path to the outcome. They asked by doing which atonement or fasting king can get rid of this sin.

Lomasa Rishi responded and told them a way out. In the coming Shravan month’s auspicious Ekadashi, king and all of you keep fast.

Afterwards, all the blessings you all will gain on doing this fast give it to the king. King will indeed have a son by doing so. On hearing Lomasa Rishi’s word, everyone was pleased. They respectfully greeted Rishi. They returned and described everything to the king. King, along with all his Praja, followed Ekadashi.

On Dwadashi, the next day, everyone gave the blessings they earned by fasting and gave them to the king. After a few days, the queen got pregnant and delivered a beautiful boy.

Lord Sri Krishna said, Hey Yudhisthira! Whoever abides this Pavitra Ekadashi fast, all his sins will be absolved, and he can achieve the supreme goal.

So let’s nurture this branch of spirituality by keeping this sacred Pavitra Ekadashi fast with complete devotion. Let’s spend our time chanting Hare Krishna Mahamantra, doing kirtans and engage ourselves in devotional activities as much as we can on do this auspicious day.

On this day, we all devotees assemble and provide service to Vaishnavas. In this way, we can please Lord Sri Krishna and make advancements to gain Krishna’s blessings.