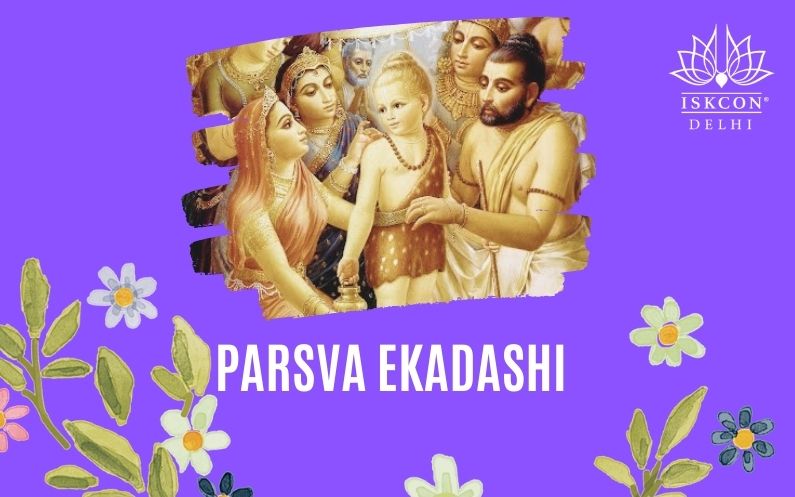 Hey Janardhan, what is the name of Ekadashi, which falls on the eleventh day of Bhadrapada month in the Shukla Paksha?

Hey Lord, please elaborate on the rituals and significance of this auspicious Parsva Ekadashi fast.

This propitious Ekadashi is known as Parsva Ekadasi. On hearing the significance of this fast, an individual can get relief from their past sins. On keeping fast on this auspicious day, the individuals get more benefits than Vajpayee Yagya. This Ekadashi is also known as Jayanti Ekadashi. An individual who worships my incarnation as Vamana Dev gets benefited with high spiritual gains. Whoever worship the lotus feet of the Lord offering lotus is considered as closest to the Lord. Any devotee who keeps fast on Shukla Paksha Ekadasi of Bhadrapad is believed to have worshipped Trilok, including Brahma and Vishnu. Therefore, it is advised to observe fast on Ekadashi.

Reason Behind Name of Parsva Ekadashi

Yudhishthira’s Query – Hey Janardhan, kindly help me in getting answers of my few questions. Hey, Devdeveshwar, how do you slumber, how you turn sideways, how we should follow these chaturmas and what to do when you sleep? Why do you keep Bali Maharaj in captivity? Kindly answer all my questions and clear my dubiety.

Hey Rajan, now you listen to this encouraging story that can terminate all the past sins from one’s life. There was a devotee named Bali born in treta yuga in a clan of daityas. He was very truthful. He used to do charity and serves brahmins. Along with his family, he always serves and worships me. He even cherished brahmins and performed many Yagya. As an outcome of it, he became highly potent.

Outcome Of His Servings to Lord

Due to his power by worshipping the Lord with dedication and devotion, he defeated Indra Dev and became crowned head of heaven. That time all the sages came to Lord. To resolve their problems lord appeared as Vamana Avtar and reached the place where king Bali was performing yagya’s ritual.

How Lord Resolved Problems of Sages

When Lord entered that place, Lord just stipulated three step land from king Bali. At the same time, Bali pleads to take more than that land. But Lord acquired only three feet of land as a donation from him. So, King Bali, without any second thought, gave Me three step of land. Immediately Lord assumed the form of Mahakal, in which in one step took the seven lokas, in the second step took the seven lokas along with the sky. When Lord asked for space to keep the third foot to king Bali, he civilly kept his head forward to provide space to Lord for the third step.

Being impressed with his devotion and dedication lord blessed him that he will always be with him. On that same day, the auspicious Ekadasi deity of Vaman Dev is entrenched at Maharaj Bali’s residence. The second deity is at Anant Shesh of Ksheer Sagar.

From Shayan Ekadashi to Utthana Ekadasi lord stay asleep. In this four-month, everyone should perform a special ritual to worship. Everyone should follow intently and wholeheartedly all the Ekadashi that falls in between these four months. By following this Ekadasi fasting, anyone can get a similar outcome as Ashwamedh Yagya. Ekadashi is the most favourite of Lord. Along with fasting on this auspicious day of Ekadashi, if a devotee does harinam sankirtan lord gets immensely impressed and bless them with the divine blessings of the Lord. According to scriptures, on hearing kirtan, remembering Lord and spending life on Lord’s lotus feet etc are the nine divisions of Bhakti. But Naam Sankirtana the is best among all. So, on Ekadashi, we should chant more Lord’s holy name.

So come let’s convene and fast on Parsva Ekadashi. On this day, chant, remember and do Naam Sankirtan of Lord’s name as much as we can, and it liberates the devotees from the cycle of birth and death. So, let’s effectuate the path of Bhakti to bestows happiness, wealth and good health and get relieves from all the sins.

All over the world, all the devotees keep fast on this auspicious day of Purvana Ekadasi. In all the temples of ISKCON, devotees chant Naam Sankirtan on this day to get the blessings of the Lord on this bright day and make their birth relevant and worthy.