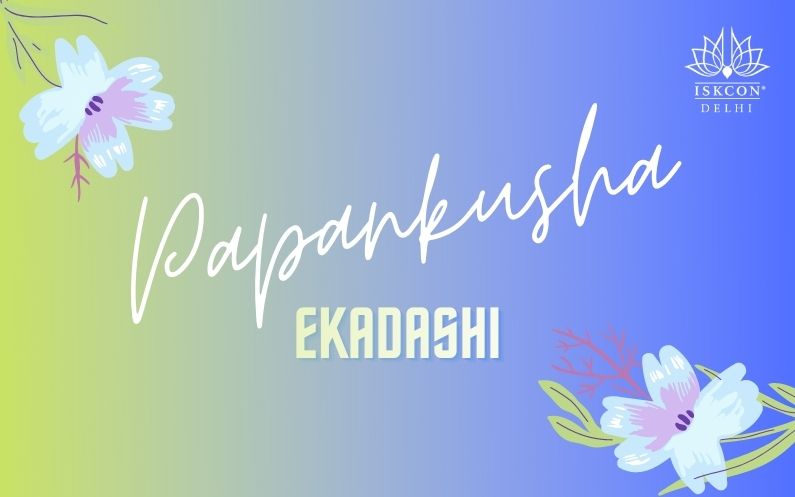 According to the Almanac, every 11th date is suitable for Ekadashi fasting. Therefore, fasting on an Ekadashi day holds great importance.

Especially the person who is willing to take a fast on an Ekadashi day must follow some essential rules and rituals from a day before the fasting day itself to continue the fast from the early morning before sunrise of the Ekadashi day. This is because this one day of fasting is believed to provide lifelong happiness and salvation.

The importance of Papankusha Ekadashi is mentioned in the dialogues of Lord Krishna and the great king ‘Yudhishtira’ in Brahma Vaivarta Purana.

THE CONVERSATION BETWEEN LORD KRISHNA AND YUDHISHTIRA

The great king Yudhishtar asks- hey! Janardan, what is the name of the Ekadashi occurring in the Ashwin month of the darker fortnight?

Lord Krishna says, – hey! Yudhishthira, the Ekadashi day that destroys all the sins, is known as Papankusha Ekadashi. This day is called Papankusha because it eliminates the elephant-faced corruption by the control of virtue of this fast.

Hey! King this day, a Human must worship Lord lawfully. This Ekadashi provides desired fruits to humans and helps them achieve high planets. However, the fruit achieved by many austerities is achieved only by offering obeisances to the Lord Garuda flag.

Hari named hymns to provide you with all the pilgrimage virtue’s fruit. So the person who takes the shelter of Lord Hari does not have to go through all the pain that is equivalent to death.

The fruit that a person achieves from shastra Vajpayee and horse sacrifice is not even equal to the 16th part of the Ekadashi fast.

Unless the person takes a fast of Lord Padmanabha’s Ekadashi day, all the sins reside in his body.

Hey! Yudhishthira, this fast rescue up to the 10th generation of mother’s side and 10th generation of father’s side. He wearing a divine body, having a four-armed form, wearing a pitamber and carrying a garland in his hand, climbs Garuda and goes to Vishnuloka. Whoever takes the fast of Ashwin month’s free side of this Papankusha Ekadashi day, he at the end of his life goes to the abode of Lord and gets liberation from all the sins.

In Ekadashi fast, you are not supposed to eat grains anything, and one should adopt and follow celibacy. This fast does not end with the Ekadashi day ritual, but on the next day (12th day), one must finish and complete the fast by donating food and honorarium to Brahmans early in the morning.

A SMALL NARRATIVE TO CONVEY THE IMPORTANCE OF THIS DAY

Once there was a fowler named Mahakrura Krodhan who used to live in the Vindhya Mountains.

He spent all his life committing sins, and at the last moments of his life, Yamraj approved to bring him to his court. However, all the messengers informed him of this thing before the decided time, and he got scared to death and went to Angira sage’s hermitage and started pleading so that he would not have to go to Yamaraj’s court.

Then Angira Sage suggested he worship Lord Vishnu on the lunar day of Ashwin month’s darker fortnight. The worship of Ekadashi day and fasting on this day liberated him from all the sins, and he went to Vishnu Lok.

So, we should all have fast on this sins destroyer Ekadashi day. So that along with the quenching of sins, we can chant more Hare Krishna maha-mantra, read, hear the glories of the Lord, and concentrate on the lotus feet of Krishna from the very bottom of our hearts. The ultimate goal of life is to get the devotional service of Lord Sri Krishna.