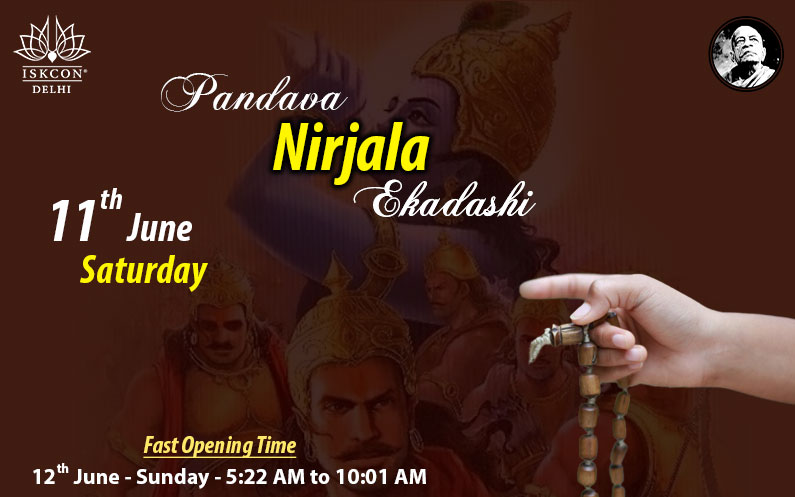 Even in the thirteenth or leap moon, it is called Adhi-masa or Purusottama-masa.

One who sees fasting on Ekadashi day is free from taking wrong actions and becoming religious life advances.

Srila Rupa Goswami tells us in the Bhakti-asamrita Sindhu Granth, which Srila Prabhupada has translated.

Especially this, devotion to please God is being presented, and we should follow these methods; many ways out there.

One of the first Ten methods is -Observing the Fast on the day of Ekadashi! Every Shukla Paksha and Krishna Paksha Ekadashi is performing at Madhav Tithe, is bhakti Janani.

That is why we should try to follow it, Srila Bhakti Vinod Thakur, Jetane Palani kori, it is all helpful to devotion, that’s why we should accept it.

Said that Ekadashi maa, who is herself, has appeared from the body of the supreme God, and this date is very dear to our Lord.

If you cannot do fasting from water, we can consume water; you can take fruit juice if this is also hard for you.

If there is a problem with that too, then it means that you can take fruits. If this is not possible, then fasting with prasad; you can have Sabudana, kuttu, fruits; people choose many things.

We have to follow the purity of Ekadashi. Without any water, one will have to perform rituals like Nirjala.

Srila Prabhupada had told this to his Disciple HG Rameshwar Prabhu whether it is Bhima Or Arjuna, is all Nirjala,

Ekadashi should be performed in the form of Nirjala, yet it is mention in Mahabharat itself.

It says that Bhimsen has expressed his helplessness;

Then Vyasadeva Ji said that you could perform the ritual of Jyeshtha Shukl Ekadashi once in the year because Bhimsen had Kept it; all the other Pandavas also kept it. Hence it is called Pandava Nirjala Ekadashi.

Once every year, which is the fasting of Ekadashi, it helps move forward in devotion. Its foremost purpose is not to keep Nirjala Ekadashi and sleep throughout the day.

Srila Prabhupada even said that if you could go taking prasad regularly, and preaching is the primary service, advertising and promotion of Krishna is the highest service.

But while hiding behind the propaganda, we should never do less than our capacity. this is also a service.

Rupa Goswami says, don’t do less than you can; if we can keep fast on Nirjala Ekadashi, we should keep it.

In ISKCON, we do not impose such strict rules because it formed to expand and spread the practice of Bhakti Yoga. It is not possible for everyone sitting on fasting, and there is no one to spread the message of our Lord Krishna.

Therefore, at least sunrise from the next day till the time of Parana, everyone should observe a fast of Nirjala.

Learning and preaching about Krishna

This day, many devotees chant 64 rounds and more; you can do self-study or listen to discourses.

One can spend more time with the deity of the Lord, whose main objective is to overcome the body’s needs and pay attention to the needs of the soul.

Regarding Nirjala Ekadashi, the priest who is a priest does not have any inconvenience to perform achaman. He can do it.

You can also consume Charanamirt; take only as much charanamirt as a mustard seed that can be immersed in it. It is not that the grain of mustard put in; it is food.

But keep in mind if there are any rules and regulations, it must obey the purpose of all this.

This verse is a quotation from Padma Purana, which says Krishna is the origin of Lord Vishnu. Therefore, he should always be remembered and never forgotten at any time. All the rules and prohibition mentioned in the sastra should be their servants of these two principles.” this is the supreme instruction.

On this Jyeshtha Shukl Ekadashi, our aim should increase maximum listening and chant on Pandava Nirjala Ekadashi.

Join the devotees and stay in the correct consciousness because we can keep whatever decisions.

We can go on the day of Ekadashi. So it is very beneficial for us for and for our devotion.

Srila Vishwanatha Chakravarti Thakur says that this is the perfect time to overview what we had done in the last 15 days.

On the day of Nirjala Ekadashi, we can think about what we had done for the whole last year in devotion and evaluation about it can do more.

Keep in mind that it is Ekadashi; if you can Nirjala, that is perfect for keeping it. but the main aim should be to remember Krishna as much as possible

It is the true meaning of Ekadashi.

The legend behind this special Ekadashi

Once the Pandav Bhima requested Shree Krishna to solve his difficulty, Shree Krishna asked him what Bhima, the insatiable eater, explained to Shree Krishna despite his serious struggles, and it was challenging for him to follow.

According to the manuscripts, one should obey Ekadashi with great respect by not eating or drinking anything the entire day. And altogether, engaging yourself functions in the different parts of Bhakti.

However, fasting from all food and water on Ekadashi showed to be tough and challenging for Bhima.

Hence he requested Shree Krishna to find an answer to his situation.

Understanding the situation to his and Shree Krishna being accommodating towards Bhima,

The Supreme Lord Krishna allow him to eat fruits and flowers on all the Ekadashi except one; he told Bhima to follow the Shukla paksha Ekadashi in the month of Jyeshta,

Without eating or drinking anything at all, in this way he was allowed to eat phalahar, fruit on all other Ekadahis except this one, Ekadashi later becomes Famous as Pandav Nirjala Ekadashi.

What should you do if you unexpectedly break Ekadashi?

Srila Prabhupada suggested that if we unintentionally eat some grain on Ekadashi, we should keep the Ekadashi Fast for the rest day and the next day in Dvadasi; if even that is impossible, we should go on with our activities in ISKCON and pray for forgiveness.

Seeks the Blessings of Krishna by donating on the occasion of Ekadashi.

Thank you Prabhu for your response

prabhu ji one question how to brush our teeths in nirjala ekadashi because a plenty of water is used to clean our teeths ,, plz urgently reply ..❤❤❤hare krishna🧡🧡🧡❤

Hare Krishna! You can do brush with water but don’t drink it. So there is no issue in doing it.

There is lots of stuff on YouTube for Nirjala Ekadashi however I personally feels this information is complete for all who wants to observe the fasting on Ekadashi. Thanks 👍 Prabhuji for sharing this information.
Hare Krishna 🙏🙏

Thank you so much for the feedback. We always try to serve you.

My nane is Devender Kumar, I am doing ekadashi fast since 5 yrs but I take patato with curd in the evening. Is it right?
Please advise
Thanks

Nirjala means we should do fasting even from water. But if you have health concerns due to which you can’t resist without water so you can have curd, potato!

Hare Krishna
I want ask that some are doing nirjala ekadashi vrat today 10 june 2022 but according to iskcon it is on 12 june 2022
So why the dates are different.
Please clear my doubt

Can we eat sabudana in ekadasi fast?? most people say it is not to used. Plz tell can sabudana be eaten in ekadasi.