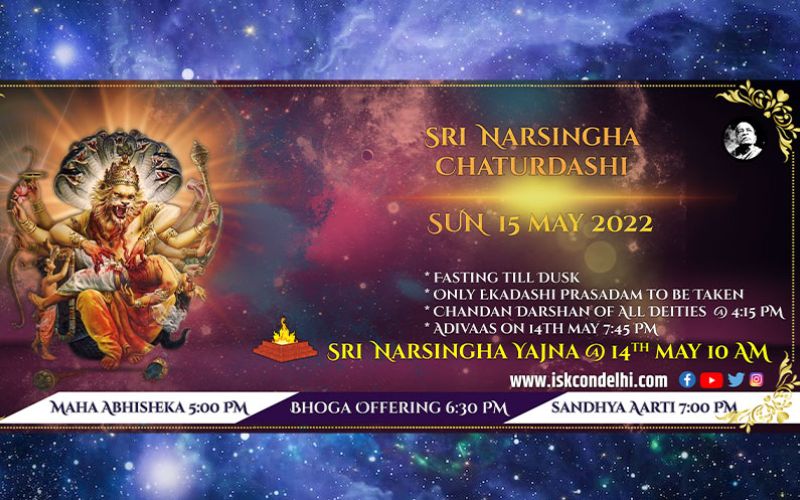 Narsingha means one who is half lion and half man incarnation of Shri Hari. Lord Narsinghdeva is also known as Vighna- Vinashak, as he protects his devotees from all sorts of obstacles. So, this is the special incarnation of the Lord to protect his devotees and their devotion.

Lord Ganesha, also known as Vighna- Harta, that blessing of being Vighna-Harta was given by Lord Narsinghdeva himself. Well, His form appears to be very fearful. But this form is the most loving, merciful & beautiful for his devotees.

Mother Sarasvati resides in the lotus mouth of Lord Narsinghdeva, and Mother Lakshami rests on his chest. This unique incarnation was to protect his beloved devotee, Prahlad, from his cruel father, Hiranyakashipu. Hiranyakashipu was a demon who won all three worlds and was always jealous of Lord Vishnu. But as his son, Prahlad was the devotee of Lord Vishnu. So because of False Ego & Jealousy, Hiranykashipu always tries to put Prahlad in miserable and dangerous situations to kill him. But in Inspite of all tortures, Prahlad always remains engaged in singing the names and glories of Lord Hari. This constant chanting of the Lord’s name always saved Prahlad from disasters.

Hiranyakashipu, ghastly, hammered that Pillar with his weapon. As a result, Pillar falls in breaks into pieces. Out of this Pillar, The most ferocious form of Lord Narsinghdeva appeared in front of Hiranyakashipu. 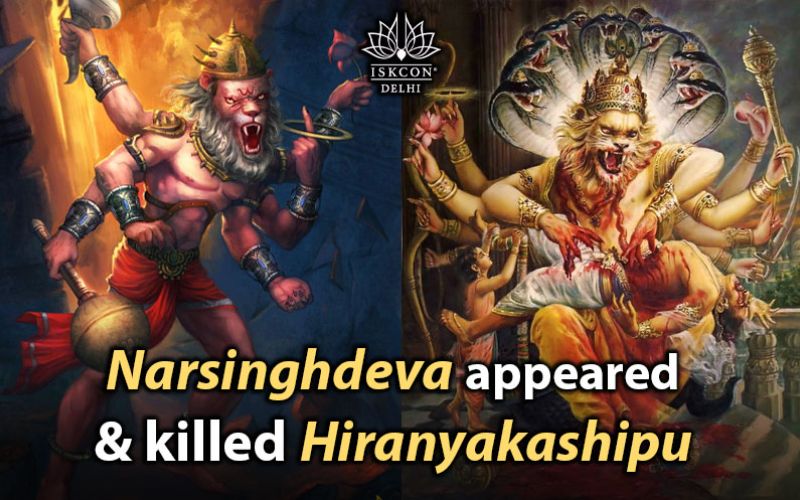 By considering this opponent as same as others.

Hiranyakashipu just started fighting with him. But this time, He was proven wrong. So Lord Narsinghdeva killed him by tearing his stomach with his three highly sharp nails. He killed him so that every word of Lord Brahma’s boon was also fulfilled that either man or Animal would not kill Hiranyakashipu, Neither in the daytime nor at night, Neither inside nor outside the house, Neither on land nor in the sky, e.t.c.

Even after killing Hiranyakashipu, Lord Narsinghdeva was roaring, and everyone was fearful. No one was willing to go near him. But then Prahlad just went near him, withholding a garland for him. 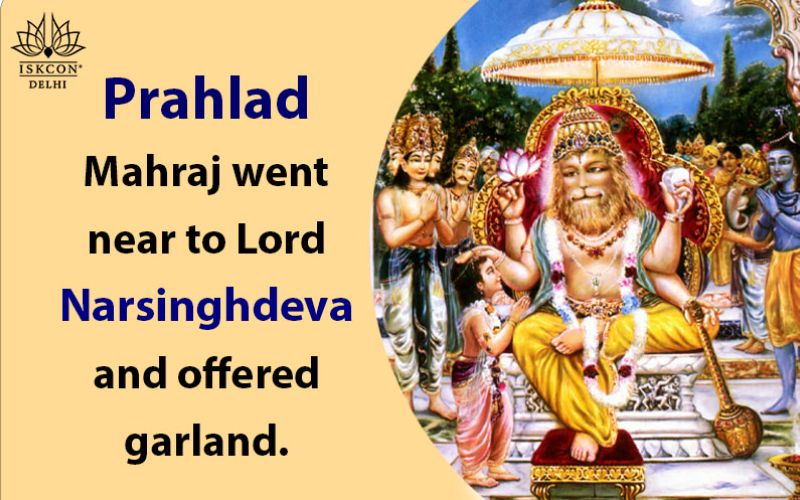 After seeing him, Narsinghdeva becomes quiet and loves Prahlad by allowing him to sit on his lap. So, this incarnation is simply the most merciful incarnation of the Lord, which occurred merely to protect his devotee, Prahlad, as He killed Hiranyakashipu. May he similarly kills all demons like Hiranyakashipu, which resides within us, in the form of Lust, anger, greed etc.

Sripad Madhavacharya sings in the glory of Lord Narsinghdeva that our Human Heart is full of Anarthas, which are natural obstacles on the path of Bhakti. Even Vajra of Lord Indra is not capable of removing these anarthas. The only one capable of doing so is Lord Narsinghdeva and his shape nails. Only He can save us from these obstacles of devotional life.

So, Let’s celebrate this auspicious occasion of Narsingha Chaturdashi and Pray unto his Lotus feet always to protect us & our devotion.