Maa Durga is the presiding deity of this material world 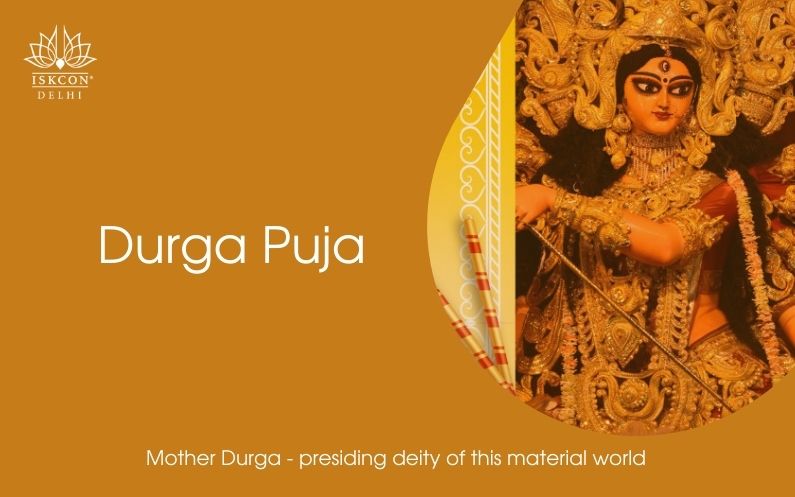 Maa Durga is a revered goddess for those who follow Sanatan Dharma. Hindus worship her all over the world in the form of Mother Shakti.

Generally, we have seen Maa Durga with ten hands with some weapons and ride over Lion, who displays his infinite powers. It is also concluded that she fights against demonic power who are trying to cause damages to peace, prosperity, and religion. Durga Puja, also known as Durgotsava or Shardotsava, is an annual Hindu festival celebrated in South Asia in which Goddess Durga is worshipped.

Who is Maa Durga?

According to Shastra, Maa Durga is an expansion of Mother Parvati, the wife of Lord Shiva. She takes the form of Navdurga and does all the upbringing of this world. Lord Sri Krishna also tells Arjuna in the Bhagavad-Gita, Chapter 9, text 10

This material nature is working under My direction, O son of Kunti, and it is producing all moving and unmoving beings. Therefore, by its rule, this manifestation is created and annihilated again and again.

The trident in the hand of Goddess Durga is a symbol of reminding all the rebels who have come into this material world of Lord through Tritaap (Adhyatmika, Adhibhautika and Adhidaivika). Maa Durga is worshipped to get rid of these tritapas.

When a person comes to this material world, they have to face many sufferings like birth, death, old age, diseases, adhyatmika, adhibhautika and adhidaivika miseries. Goddess Durga takes care of all these things.

Therefore, worshipping Goddess Durga will help them get rid of these sufferings. However, if you want a permanent solution, you have to come out of this material world.

To get rid of the cycle of birth and death, people worship Goddess Durga. As a result, such living beings get an opportunity to do devotion to the Lord. As a result, they get rid of Mahamaya, the potency of the Lord, and come under the protection of his own Shakti, Yogamaya.

Srimad Bhagavatam also mentioned that the Gopis worshipped Mother Katyayani to get Lord Krishna as their husband. It is also mentioned in Brahma Samhita, Chapter 5, Text 44-

The external potency Maya who is of the nature of the shadow of the cit potency, is worshipped by all people as Durga, the creating, preserving and destroying agency of this mundane world. I adore the primaeval Lord Govinda in accordance with whose will Durga conducts herself.

The Lord presides over this material world objectively, and those who do not accept it are sent to this world of duality. Therefore, by coming in contact with a pure devotee, if the living entity understands that this material world is not his real home, he becomes free from here and goes to his original home in Vaikuntha or Goloka Vrindavana and attains bliss forever.

So on this Durga Puja, let us pray to Maa Durga to give us enough strength to get us out of this material world and go back home, back to Godhead.