How Hare Krishna Movement Spread to the World 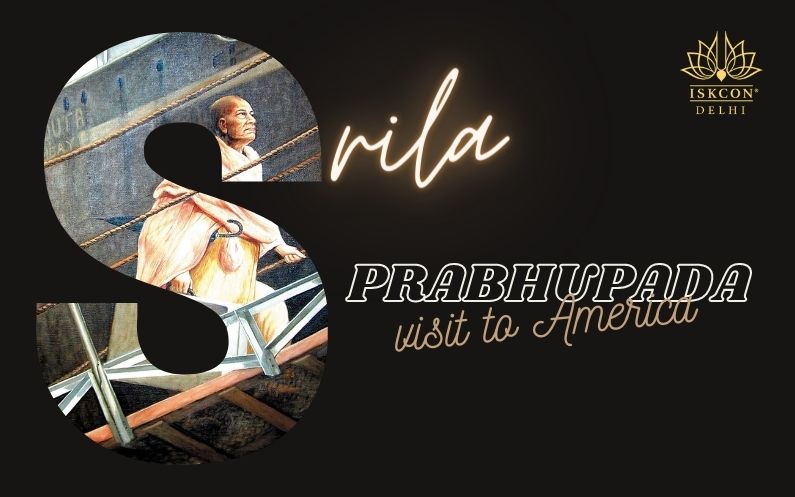 According to Vedic tithi, Srila Prabhupada landed in America after a 37 days long, tiring journey. He went there by a cargo ship named “Jaladuta”. According to the English calendar, 17th September 1965 is an unforgettable historic day, when Krishna bhakti or Krishna consciousness revolution (Hare Krishna Movement) erupted in the entire world. On this day, Srila Prabhupada resolute the devotional service of Krishna in the heart of American People on his spiritual master’s order.

Srila Prabhupada vocalized that everyone wishes to go to London in general, but I planned to go to America instead. I used to think about how to go to New York. I always make new strategies thinking about how can I reach there and what should I do about it. So many questions arise in my mind, such as is going through the Tokyo route fine? Going through which way will cost less? I always used to think about all this. I always had an aim to go to New York.

How He Planned His Journey

Nearly at the age of 70s, a septuagenarian started printing books, prepared passports and kept many other documents ready, which are compulsory for the set foot in America. For doing all this, he struggled a lot but never stopped preferment of Krishna Bhakti. Even because of his increasing age, he faced many health issues, but these hurdles could not distract him from his aim.

In that unprecedented journey, envoy Srila Prabhupada in a ship named Jaladuta was travelling to promote Krishna bhakti among the people of America. Despite having suffered two heart attacks during his journey of panic and dizziness, Srila Prabhupada still depended on Lord Krishna to follow the Guru’s instructions. After 15 days of an agonizing journey, the seafarers were startled to see the Atlantic ocean that much calm.

They said that they were feeling as the rein of the ship was in Lord Krishna’s hand. In a conversation, Srila Prabhupada said that he was all alone. No one in my family was with me. But I felt that Lord Krishna was with me. On the day he stepped into the land of America, he wrote about Markine Bhagavata Dharma, a poem on the preaching of Bhagavad Dharma. In this poem, he wrote about the conversation to Lord Krishna about everything in the heart of Srila Prabhupada and pleaded for his blessings.

Summary Of The Poem

You are so kind to this tiny person. I don’t know why you brought me to this materialistic world. So you can do whatever you wish with me. Here most of the people are indulged in rajasik and tamsik work. But I know you are a great magician or if you want you can do anything.

I can just repeat your words, and if you want, you can manipulate my words and make them understanding. With your grace, my words will get sacred and will be perforating. I am just a puppet of your hand. However, you want me to dance, just make me dance too. I don’t have little Bhakti and Gyan. But I will entirely rely on your holy names. I got the title of Bhaktivedanta, and if you want, you can make this name accurate.

As a miserable beggar as a native of Vrindavan covering by gone shawl in body, wearing ordinary sleepers, tilak at the forehead, kanthi mala in the neck and taking Japa mala in hand. Vaishnava Sanyasi came to New York for the first time.

People of New York unnoticed this ordinary-looking sanyasi. They were unaware that this person came to relieve them from an essential part of our life: the life and death cycle. He has the priceless treasure of Krishna Bhakti which is the ultimate treasure of life.

How Srila Prabhupada Cope in America

Srila Prabhupada said that when he reached America, he had 4 Dollars only. When he insisted captain of the ship Shriman Pandya to purchase one set of Srimad Bhagavatam, he asked how much it cost, Srila Prabhupada answered 16 dollars. Sriman Pandya gave him 20 dollars instead of 16, which is the only thing other than books he was having along with him.

Srila Prabhupada’s journey to America is exhilarating. After reaching there, the intensity of the publicity of Krishna Bhakti increased.

What Should We Comprehend

Each moment of the founder of the ISKCON, Srila Prabhupada’s life is dedicated to his spiritual master and Supreme Lord Sri Krishna. And this is the ultimate reason that he was successful in bringing the revolution of bhakti. So we all should admire him and learn the lesson of extreme dedication, devotion and sacrifice.