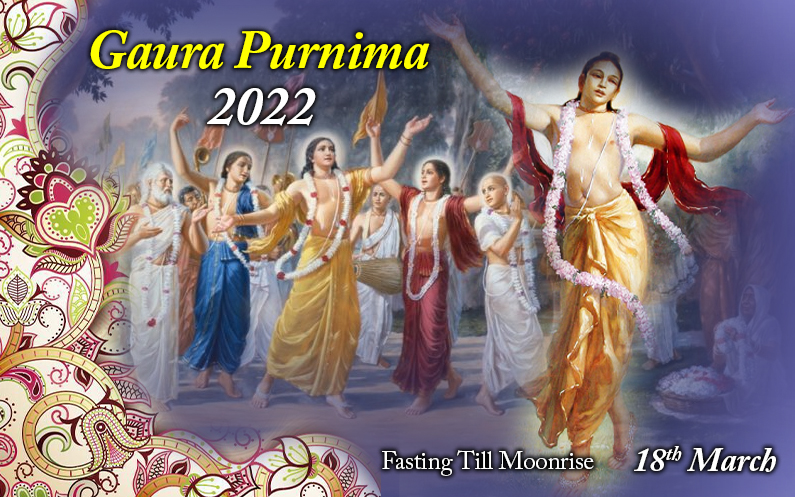 Who is Chaitanya Mahaprabhu

Shree Chaitanya Mahaprabhu was a very important and special incarnation of God. God has taken this form for the people in the age of quarrel and sorrow i.e. “Kali-Yuga” for their welfare. Most of the people even don’t know Him and also don’t even recognize Him. If anyone knows Him, they know Him as a saint or a devotee. Those who know Him they praise Him as a devotee which is not wrong because He has taken this incarnation just to teach us how to do “Bhakti” or become a pure devotee. However, it is not fully correct; He is undoubtedly a devotee of God but also God Himself.

Lord Shree Krishna advents just to show the people of Kali-Yuga how to do bhakti, but this is also a fact that people do not believe that Chaitanya Mahaprabhu is God himself. They say, “We know that He was a great Saint, a great Devotee, has done a great work in devotional life but how can we believe that he was Personality of Godhead Krishna Himself?”

How to check authenticity of God

So, to answer this query, the first question arises, “How can we identify any incarnation of God?” especially in today’s era where we get to know about many self-declared Gods here and there. People are confused and don’t understand who is God actually?

So, the truth is that, no one can become God; God is not a position which can be acquired. God is always God and will remain to be God always either in past, present or future. God cannot become anything except God and the one who is not God cannot become God in any condition.

God has hidden His real identity because He wanted to play the role of a devotee. The information can be found in Srimad Bhagavatam that God would come and spent His time doing the mass kirtan with His followers. This would do the welfare of human society.

Second proof we can get from Mahabharata. When Bheeshma Dev was giving knowledge to Yudhisthira Maharaj there he pronounced Vishnu Sahasranama. He also described about Sri Chaitanya Mahaprabhu and told that Mahaprabhu body complexion would be like molten Gold, He would be very beautiful. He would accept Sannayas Ashram and would spread peace everywhere while doing the devotional service of God.

There is one more proof that can be referred. We have 108 Upanishads out of which one is Chaitanya Upanishad, and can be found in Atharva Veda. From this upnishad we can know that Brahmaji has one great ascetic son Pipalad. He questioned to Brahmaji, “What is the easiest route of welfare for the people of most fallen age, Kaliyuga? Which mantra should they chant? Which Demigod should they worship?”

Brahmaji became very happy and replied, “Govind who resides in Goloka Vrindavan Dham, is the beautiful deity form of Spiritual World. He is beyond material senses and is the Controller and Originator of Infinite Universes. He is the Absolute Truth whose lotus feet are meditated upon even by great saints and demigods. That Lord Sri Krishna will appear in Kali-Yuga as Gaura on the bank of Ganga in Navdeep Nagar. He will be known as Sri Chaitanya Mahaprabhu” Saying that, Brahmaji paid his obeisance unto the Lotus Feet of Chaitanya Mahaprabhu. Brahmaji very clearly told that Chaitanya Mahaprabhu is God himself and He even foretold that Chaitanya Mahaprabhu would spread happiness everywhere by chanting His own name:

Brahmaji also added, “This is an absolute mantra and it can be known only through Devotional service.”

“He is the Supreme Personality of Godhead who resides in everyone’s heart as Supersoul, parmatama. Whose feet are even worshipped by Anata Sheeshji and Lakshmiji. In Kali-Yuga, if someone wants to attain Lord Sri Krishna, it would be possible only by the path demonstrated by Sri Chaitanya Mahaprabhu”.

In this way, many scriptures clearly define that Sri Chaitanya Mahaprabhu is Lord Krishna Himself and He has taken this form to give love of Krishna to the people of Kali-Yuga using Hare Krishna Mahamantra.

Apart from this if someone is God he should show his Universal form like Lord Sri Krishna has shown to Arjuna. Lord Sri Chaitanya Mahaprabhu had shown His universal form to Advaita Achraya. He presented his Varah form to Marari Gupt. Nityananda Prabhu who is Balrama Himself, Mahaprabhu presented Shatbhuj form in which he was playing flute from two hands as Krishna in Vrindavan, in the other two hands He was holding bow and arrow as Sri Ramchandra and in the other two hands He was holding Sannayas stick and kamandal as Chaitanya Mahaprabhu. He also presented His RadhaKrishna form to Ramananda Rai.

Now let’s talk about the third prospective to identify and authenticate the incarnation of God. One’s capability to do something divine and extraordinary; which cannot be done by any Human Being. Sri Chaitanya Mahaprabhu performed so many divine activities which we can’t even imagine. Let us discuss one of such pastime.

When Sri Chaitanya Mahaprabhu after accepting Sannyaas Ashram was performing Naam Sankirtana along with a servant, Balabhadra Bhattacharya, He reached in today’s Jharkhand. At that time it was a big and dense forest there. As Chaitanya Mahaprabhu passed, doing Hari Naam Sankirtana, even wild animals gave them route to pass and danced on Krishna’s name. Tiger and Deer started treating each other with love and affection. This was the effect of God and devotion. Even Trees are attracted towards Him. In that way Deer, Peacock, Monkey and Cow rendered service to Lord Krishna. Learning for all of us, when deer and tiger can live together then why not we humans belonging to different caste, country can live together?

Peace formula for the world

Today, war happens between nations belonging to different castes. Even they fight within themselves. But from the above example we can see that if Krishna’s name and devotion will be spread everywhere, there would be love, brotherhood, compassion and friendship. Thus, vanishing all the bad qualities, lack of knowledge and violence at once.