This Dussehra Kill Your Ravana 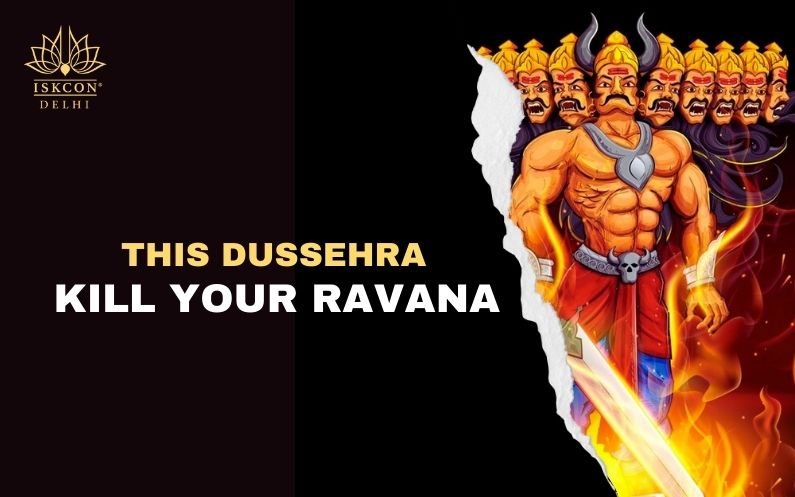 Ashwin Shukla Dashami is known as Dusshera. It is one of the biggest festivals, also known as Dasahara, Dussehra, or Dashain. It is observed on the day of Vijaya Dashami, the tenth day of Navaratri. It is the occasion to glorify and rejoice in the victory of good over evil. On Dussehra, we burn effigies of Ravana outside in surroundings but nurture Ravana inside our hearts. That was Treta Yuga, where only one Ravana existed. Lord Rama assassinated him and acquired victory.

Types of People in Kalyuga

In Kalyuga, every human being has the mentality of Ravana inside. But, as we all know, two types of people exist in this universe- Sur and Asura. Those who worship the Lord are counted as Sur, and those who are not devotees or do not follow the Lord’s orders are considered Asura.

The nature and personality of a person totally depend on how strong and determined he is. The day we can kill the malicious, vicious behaviour, we can kill the Asura or Ravan from our selves and that day will be the real Dussehra for us. Do you know? It becomes very painless to do if you are a devotee and listen to Lord’s pastimes.

How You Can Kill Ravana Residing Inside You

One oil lamp is enough to end darkness, similarly to cease Ravana inside, one thought is enough, and we get that thought from our Shastra. In Bhagavad Gita, Lord Krishna tells us three ways to hell-lust, anger and greed. These three are clearly visible in Ravana, and by learning the lesson from his life, you can save yourself from its fury. In the 2nd chapter of Bhagavad Gita, Sri Krishna says about how declination of a person takes place, how a person starts to flunk.

A person’s declination starts by thinking about sexual desire. In creating, it is similar to a small seed. Still, if this seed slowly gets irrigated by contemplation, it becomes Asura. Ravana was also such type of giant Asura. Even many great deities palpitate by his name. He had done many austerity and Tapasya to acquire strength, but Ravana aimed to satisfy all sexual desires for an unlimited period. So his senses became the reason for his end.

Ravana had all the desirable things of this world. But on hearing about the beauty of Mata Sita from his sister Surpanakha, his mind filled up with sexual desire, and that is the beginning of his declination. He always considered himself as strongest, but he never had control over his senses.

Your Senses Could be the Reason for Your End

So it’s true that even if a person achieves victory in this whole world but if his mind is not in control of his will, he will indeed get defeated. Mata Sita is Lord Rama’s wife. If Ravana did not had any wrong intention and served her as he was a great scholar and he knew who is Sita mata, he might have become a devotee.

Still, due to lust he had chosen a wrong way and started thinking that he can get anything. Even after knowing who is Lord Ram, he had started thinking lord as his rival. He had decided to get Sita Mata and for that he was ready to stoush with lord Rama.

So in that condition, his lust  for her got transformed into anger and became the reason of his end. This only happens with us; when we get hyper, whatever we desire to get when we do not get that, we loose our temperament. Due to that anger, a person loses his ethics and morality that is the sense of thinking about what to do and what to not.

Ravana also forgot his ethics and made a plan and went to Marich. Marich acquired the form of golden deer. Ravana himself attained the form of a saint. He was the son of a brahmin and also was a great scholar. But lust, anger and greed deformed his personality.

Similarly, when someone’s heart gets filled with lust, his heart becomes filled with fraud. Then he starts to cheat everyone as Ravana cheats Mata Sita attaining the form of the saint. Ravana forcefully takes Sita Mata to Lanka with him. Sri Ram sends all soldiers of Hanuman Ji and Sugriva in all directions to search Sita Mata. Hanuman Ji crossed the sea and searched Mata Sita.

After reaching there, he gave Lord Rama’s message to Sita Mata. He destroyed Ashok Vatika. Later on, he burnt various places in Lanka. He gave a warning to Ravana that I am the slave of Sri Rama. So it will be better for you if you return Mata Sita. Otherwise, wait and see what Lord Rama will do with you.

But Ravana was so indulged in it that he did not take that warning seriously. When Vibhisan tried to make it, he understood Ravana ordered him to get deported. His wife Mandodri kept on trying to make him understand that stay satisfied with me we have a happy family I will fulfil all your desire. Please let Sita go. Can’t you see the hanging rope on you? But Ravana was not ready to understand anyone’s advice, such as his wife, Hanuman Ji, Marich, and his own loving brother.

Such lust, anger and greed in our hearts are similar to Ravana, who steals bhaktirupi Mata Sita from our hearts. And we start to consider Lord as our enemy. And in such conditions, we don’t accept the words of saint and Shastra. There was no other way other than war. Ravan was seated on a wheeled carriage, and Ram was standing on land. In that condition, Indra dev sent the carriage for Lord along with the charioteer. It was a great war, and to witness that all the demigods even convene. It was the biggest war in history.

If we desire to learn the truth, we have to take shelter under Guru and serve him courteously.

Lord Rama himself teaches us by showing his life as an example that if we want to defeat Ravana inside us, we have to serve a true devotee of the Lord as a guru. So, on being happy with Lord Rama, Muni awarded him Aditya Hriday Mantra.

Lord’s one name is Aditya, which means sun. As the sun vanishes all the darkness, a true devotee can acquire control over all such thoughts.

How Devotees Serve to Lord

During this war, Vibhisan reached there; he said to Rama that there is Amrita or nectar in Ravana’s heart. And on drying it, only Ravana can be killed from the heart. Here Vibhishan depicts the role of a true companion devotee.

It teaches us that while fighting with the Ravana inside us, we need devotee companions to remember what learning we obtained from Guru, Sadhu and Sastra.

Further, lord Rama used the arrow on Ravana given by Agasthya muni after reciting the mantras. As a result, Ravana falls from his chariot. The scene depicts as on beating Indra’s thunderbolt any mountain got diminished.

In this way, Lord is teaching us how to win from internal Ravana along with external Ravana present in ourselves. We have to chant mantras because they will provide strength to us.

This mantra smash lust, anger and greed as in Aditya Hridaya Mantra  Lord Vishnu’s strength is present. Similarly, in Hare Krishna, the maha-mantra concludes all the power of the Lord.

Three Things Needed To Kill Ravana Inside Us

By following these three points in our life, we can defeat the Ravana inside us. And bring transformation from darkness towards light and celebrate Dusshera every day.