Annada Ekadashi – This fasting can immediately ruin all the sins 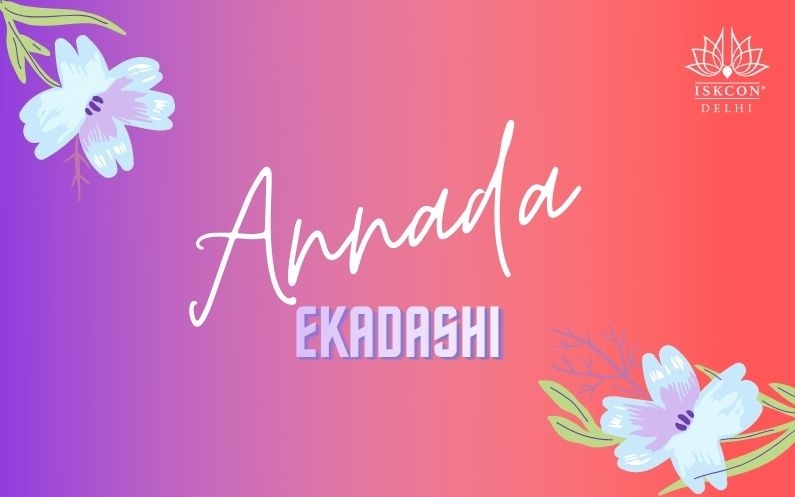 Ekadashi Fasting is considered the most fruitful and holy fast. Ekadashi fasting is considered most beloved to Supreme Lord. On observing fast on this day, people can get rid of any sin, among all the donation such as Gold, Anna, Land, Cow, Kanyadaan, Sacrifices, Pilgrimage etc., blessings gained in this day by observing fast greater than all sorts of charity mentioned in scriptures. It is the easiest way to please the Supreme lord.

In Brahma Vaivarta Purana, in a conversation between Yudhishthira Maharaj and Supreme Lord Sri Krishna, the importance of Annada Ekadashi has been described.

Yudhisthira Maharaj asked to Lord Krishna- Hey Janardana, what is the name of the Ekadashi which falls in Krishna paksha of Bhadra month?

Kindly describe the importance of this Ekadashi in detail.

Lord Krishna’s Reply – Hey Rajan, the name of this auspicious Ekadashi is Annada Ekadashi. It has the power to ruin all the sins. This Ekadashi is also known as Aja Ekadashi. So whoever follows this Ekadashi by keeping fast and praying Hrishikesh can get rid of an immoral act.

Long ago, in the dynasty of Lord Ram Chandra, an emperor born named Harishchandra. He was very truthful. Because of any sin done in the past and to fulfil his words, he lost his kingdom. Not even this, he even sold his wife and son.

There was no downfall in his behaviour. In this way, he spent many years. One day the King was thinking about his bad luck.

King’s thought- The King was cursing his fate and was thinking – What he should do now? Where should he go? And now what he has to do? How can he get rid of all the sin he had done?

The King, in this way, was highly indulged in deep thought. By watching him in the worst condition, one day, Gautam rishi came to him.

On watching rishi, one thought came to King’s mind that Supreme Lord created Brahmanas only for people’s welfare. So after greeting rishi, the King said about his cursed fate and worst condition.

On observing King’s circumstances, Gautam Muni replies – Hey King, because of your good deed Annada Ekadashi is coming very soon. So on this day, keep fast and stay awake at night. By following this, you will get rid of all the sins you had committed. Hey King, I came here only for you. So the King kept this fast with complete devotion and got free from all the sins he committed.

Lord Krishna said, hey King, this fasting can immediately ruin all the sins of previous birth. Due to the effect of this fast, King Harish Chandra got his wife and dead son alive. He also brought back his kingdom. After few years, King, along with his family and people of his kingdom, went to eternal abode.

Lord said, hey King – whoever will keep this fast will get into the spiritual world. The person who will listen or read the importance of this fast with complete devotion will get resultant equal to Ashwamedh Yagya.

Keeping fast on Ekadashi indeed pleases Lord Sri Krishna a lot. He ruins all misfortune, scarcity of wealth and all kaleshas. If the lord Sri Krishna gets pleased by the devotional service of his devotee, He can completely change the fate as He made Vibhishana king of Lanka, gave the vast kingdom to his bhakta Dhruva, and also give the place to devotees unto His lotus feet.

So in case if Krishna is listening to our prayers. The real question is what a devotee should ask for?

We should ask our lord for unmotivated devotional service. On getting this, not only me, even my whole descendent will be blessed. So let’s keep fast on this auspicious day of Annada Ekadashi this year, chant the lord’s name, engage in the devotional activities the whole day and try to please the Supreme Personality of Godhead, Krishna.