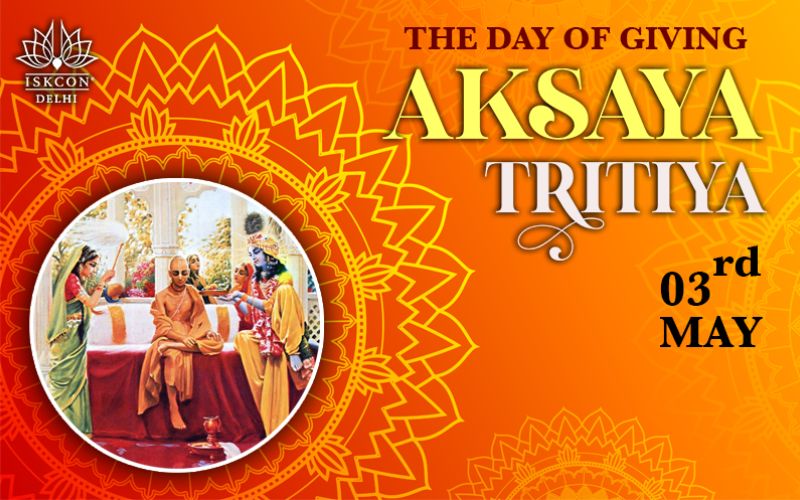 Akshaya Tritya is considered the most auspicious day to start any new activity. It appears on the third day of Shukla paksha of Vaishakh month. The third day of Akshaya Tritya is utsava tithi, which means it falls on the same day every year. This utsava tithi in the Hindu calendar corresponds with the third day of Shukla paksha, which begins at sunset of each lunar day. The date will be determined based on various factors, such as which Vedic deity is worshipped that night and whether any auspicious event occurred on that particular moonless night. The next Akshaya Tritya will fall on May 3rd, 2022.

In the Hindu religion, Akshaya means that which is unlimited, unbroken. Therefore, this day is celebrated for eternal and permanent happiness, peace, and prosperity. Many great things happened on this day. For instance, 1500 years ago, Buddha was born in India, and he would later teach people about mindfulness and meditation and become known as the “Gautama Buddha.” 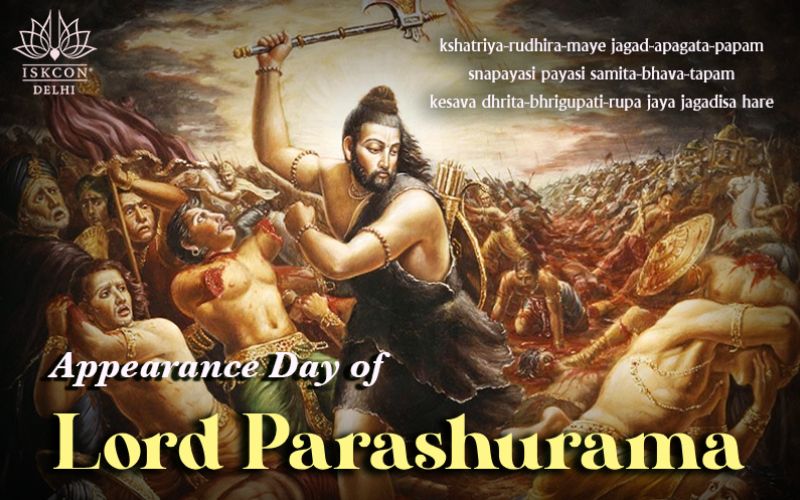 “0 Kesava! O Lord of the universe! O Lord Hari, who has assumed the form of Bhrigupati [Parasurama]! All glories to You! At Kurukshetra, You bathe the earth in the rivers of blood from the bodies of the demoniac Kshatriyas that You have slain. The world’s sins are washed away by You, and because of You, people are relieved from the blazing fire of material existence.”

2.) On Akshaya Tritya, Demigod Sun presented Akshaya Patra to Draupadi and Pandavas. This vessel was a divine vessel where Draupadi could prepare unlimited foodstuffs till she took prasadam. 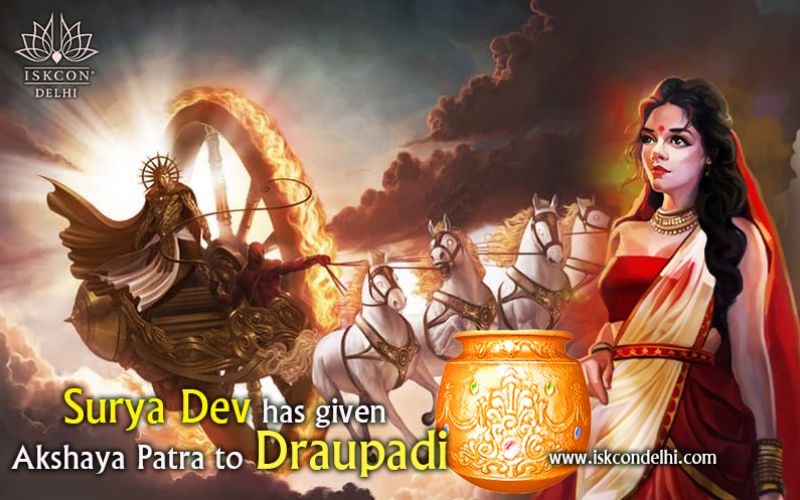 However, it is essential to note that this vessel was not helpful on other days of the year, and on different days of the year, it would be filled with flowers and incense to cleanse it of its ill-gained impurities.

3- The Holy river Ganga appeared in this material world from the spiritual world on this day. First and foremost, the flow of the Ganga river was controlled by Lord Shiva on his matted hair, and then he released it on Gangotri. 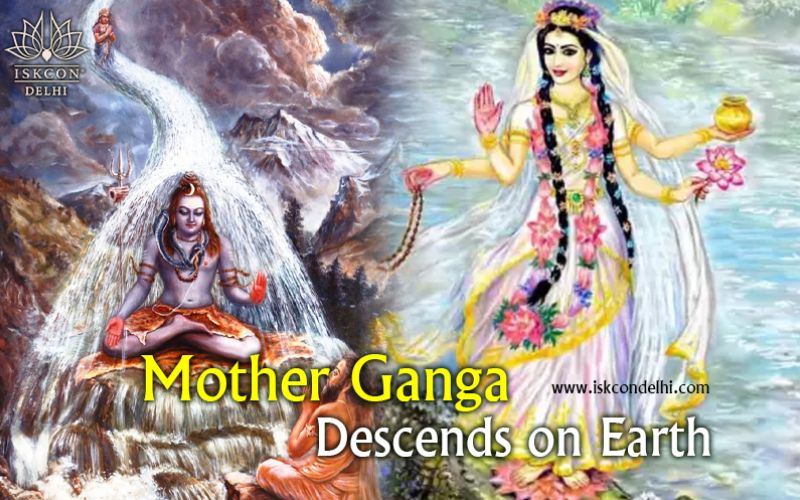 4.) Akshaya Tritya is the day on which Lord Shri Krishna was welcomed back to Dwarka. Sudama, a close friend of Lord Shri Krishna, came to meet the Lord to secure his and his family’s future. 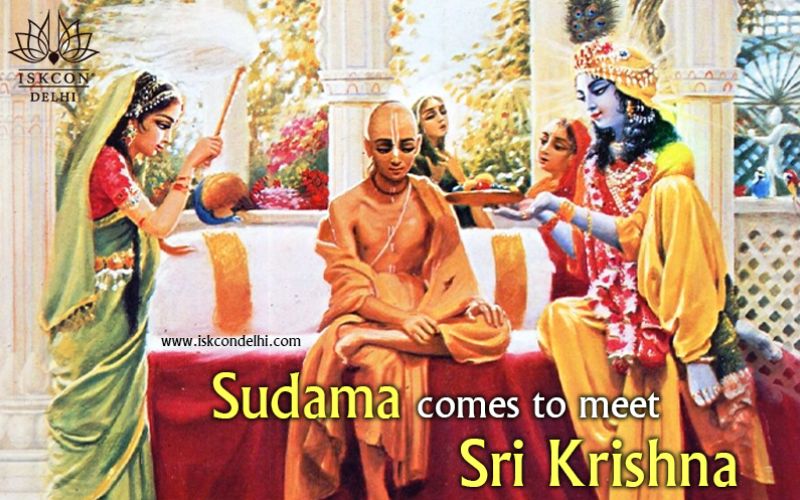 He presented the Lord with puffed rice, which he had received from friends from afar. The Lord was pleased to accept and consume those puffed rice. Thus the Lord gave him benediction for all his opulence.

5- On Akshaya Tritya, Lord Ganesha started writing Mahabharata, a great epic, under the supervision of Vedvyas Ji. Mahabharata is one of the important scriptures and contains Bhagavad Gita. 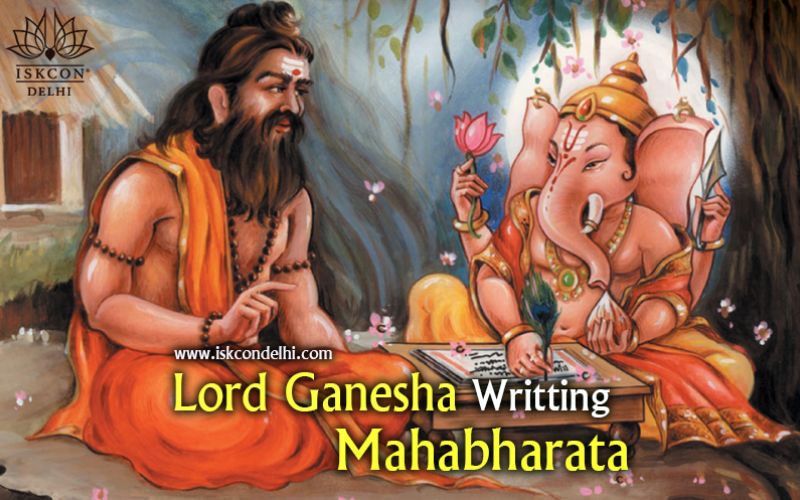 This work of fiction tells the tale of a warrior prince named Arjuna who strives to win his throne from his wicked uncle. Vedavyas first wrote down this epic on this auspicious day.

6.) On the day of Akshaya Tritya, the day before the summer solstice and significant because it is the first day of Anant Chaturdashi, a new cart is built for Lord Jagannatha. This cart will be used in rath yatra. 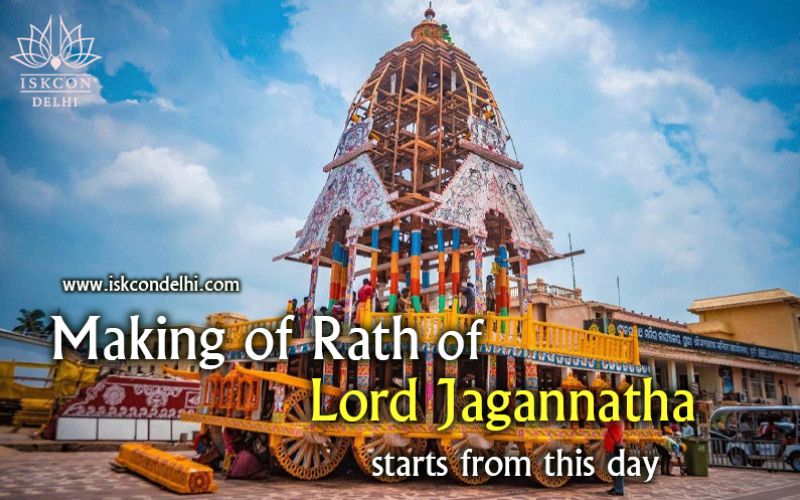 In this tradition, Lord Jagannatha and His brother Lord Baladeva Ji are taken on a procession from Jagannatha temple to Gundicha temple every year. The construction for this cart starts on that day.

7- Shri Madhvendra Puri Ji is an Indian spiritual master who was in his late 20s when he began exploring the path of spirituality. At 27, he renounced the world and became a wandering ascetic for five years before settling at Jagannath Puri. Shri Madhvendra Puri Ji is regarded as a perfect model of devotion to Lord Krishna. He has been celebrated in religious texts from various Gaudiya Vaishnavism traditions and has influenced other religious figures like Sri Radha Krsna devotees and Hare Krishnas.

Madhvendra Puri is an Indian spiritual leader born in Mumbai and lived there until he was eight years old. He proceeded to Jagannath Puri to get some sandalwood, but on the way, he stopped in a small village named Remuna. In Remuna, there was a magnificent and divine temple of Lord Gopinatha Ji, famous for His mahaprasad. It was said that His mahaprasad Kheer, sweet rice, was just like nectar. 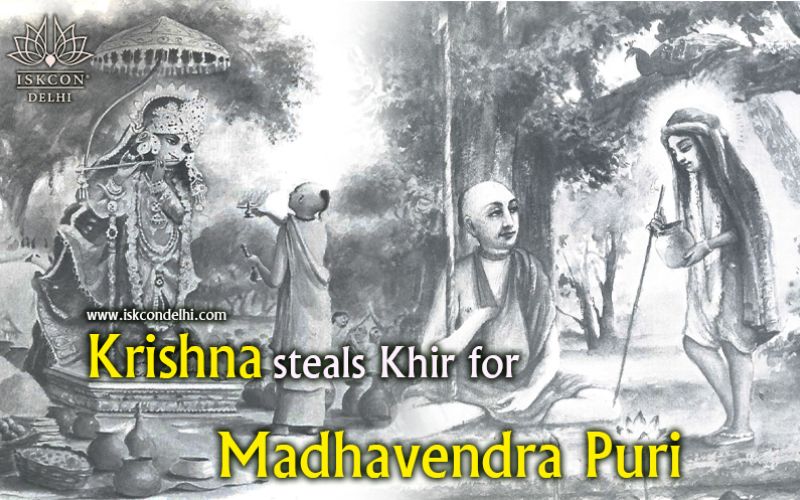 Madhavendra Puri desired to taste it, thinking he would also prepare similar food in Vrindavana and offer it to the Deity of Gopala. Then he immediately realized his offence that he had desired to taste the food before it was offered to the Lord. Repenting to his unholy thought, Madhavendra Puri left the temple. Procrastination is an undesirable habit: In less than a month, we will be launching our website, and our volunteer base will be expanded nationwide. We’re so excited! But some people are more excited than others. Unfortunately, in particular, one person is dragging their feet- and they’re just not going to do it by themselves.

Lord Gopinatha, or Krishna, is a prominent deity of Hinduism. He is also known as Gopinath, Govinda, and Keshava. He is a God of love and devotion who is considered the greatest avatar of Vishnu. In a dream that the temple priest had on that night, Lord Gopinatha instructed him to go to Madhavendra Puri and give him the pot of sweet rice which he had hidden under his garments. So the priest went to Madhavendra Puri, where Lord Gopinatha was so overwhelmed by ecstasy to learn everything from him that he continued his journey and reached Puri, collecting sandalwood and camphor.

Madhavendra Puri had gone on a pilgrimage to Haridwar, but he returned to Remuna on his way back. There, he had a dream in which the Gopala Deity at Vrindavan told him to grind the sandalwood into pulp, mix with camphor and apply it to the body of the Gopinatha Deity. Lord Gopala said that He was non-different from the Deity of Gopinatha. So Madhavendra Puri made all arrangements to carry out the order of Lord Gopala.

A tradition popularly known as Chandan yatra starts from the day of Akshaya Tritya and lasts for 21 days. Chandana-yatra celebrations, Chandana (sandalwood pulp) is applied to the Lord. It is considered very auspicious to start anything, and most people purchase gold on Ashaya Tritya. In Spiritual life, God’s name and His devotional loving service are priceless. That is why today, we should chant the names of God more and more or start chanting the names of God.

Hare krsna very helpful to me, I know many things ,I am glad to read it

Hare krsna very helpful to me,,I am glad to read it

Prabhu why you are saying that Mahabharata is a work of fiction? Fiction means some imaginary story. Maharbharata is not fiction, it is itihasa, or factual history, ancient history of the universe. I strongly suggest you to please change that. This is what atheists and other non devotee philosophers say – that Mahabharata and other scriptures are works of fiction. By saying this we are playing right into their hands. Thank you – RIshahbdeva Dasa