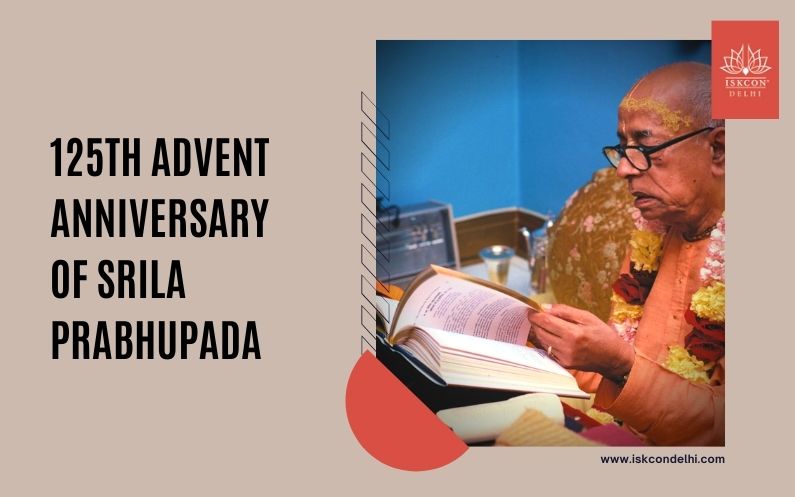 Fortune teller Prophecy of Spreading Devotion Across the World

After the birth of Abhay Charan, his father called the astrologer at home to get the horoscope made. Whatever that astrologer said was 100% correct. He foretold that Abhay would go across the sea at the age of 70, spread devotion, and build 108 temples.

The same type of prophecy was also made by Lord Sri Chaitanya Mahaprabhu, the founder of Yugadharma Sankirtana Yagya. He said a devotee of his commander would spread this Sankirtana movement to every town and village around the globe.

Srila Bhaktivinoda Thakur, another distinguished pure devotee of the Gaudiya Vaishnava guru-disciplic succession, also predicted that someone would soon come to propagate the voice of Sri Caitanya Mahaprabhu to the whole world. Soon, Harinama Sankirtana will be sung in the streets of different cities of the world as a whole. And the day will also arrive when the good creatures of England, Germany, France, Russia, and several other countries will be seen dancing in Harinama Sankirtana with Gaudiya flags, Mridanga and Kartal in Sri Mayapur Dham.

Srila Prabhupada Journey to the path of devotion

Shri Gour Mohan De had taught Abhay to practice the aspects of pure bhakti since his childhood. He used to take Abhay to the nearby Sri Sri Radha Govind Temple, and on the insistence, he also organized a Rath Yatra of Lord Jagannath for the children in the courtyard of his house. When Abhay was eight years old, he started going to school, and gradually he started becoming proficient in the English language.

At the age of 16, Abhay had countered the sad demise of his mother. His mother, Rajni Devi, passed away when Abhay was just 16. Due to this, there were some hardships and ups and downs in Abhay’s life, but his father consoled him by saying that whatever Supreme Lord does, he does it for good. Therefore, Supreme Lord would have a better plan for this. So, have faith in the Supreme Lord and depend on Him only.

At that time, it was a time of significant change for the whole world. The First World War was on the flare-up. Shri Gour Mohan De was not in favour of sending his son abroad for higher education. Then at the age of twenty, Abhay enrolled in the well-known Scottish Church College in Kolkata.  He wanted to make Abhay a pure devotee, but for this, a Guru was needed in the form of a pure devotee. In college, Abhay took education in English and Sanskrit along with many other subjects.  At that time, Abhay was interested in participating in the Indian freedom struggle. He was greatly influenced by Mahatma Gandhi’s non-violence and indigenous ideas and considered him as his ideal.

Meeting of Srila Prabhupada with his Guru

Seeing Abhay’s inclination towards nationalism, Shri Gour-Mohan De was very worried about making Abhay a pure devotee.  He wanted to know the prediction of that astrologer being turned into reality. With the passage of time in this process, Abhay got married to Radharani Devi.  Abhay didn’t have any unique attraction towards his wife, but his father told it to be a sign of the Lord’s grace because, in this way, he could stay away from worldly attachments.  At the same time, his friend introduced him to Srila Bhakti Siddhanta Sarasvati Thakura. Later, Abhay acknowledged him as his guru.

Amid the turmoil in the business and education, the death of Shri Gour Mohan De left a massive void in Abhay’s life. In 1932, he received formal Diksha (initiation) and was named Abhay Charanaravinda. Gradually, he devoted himself to obey the orders of his guru, and later the Abhay Charan became famous as Abhay Charanaravinda Bhaktivedanta Swami.

Established 108 Temples Across the World

At the age of seventy, he travelled abroad alone, even after two severe heart attacks, struggling with many personal and bodily difficulties, and proved the astrologer’s prediction to be correct, which was made in his childhood come true. He preached Krishna Bhakti while doing parikrama (circumambulating) the whole world fourteen times and established 108 temples.

Inspired by his pure and factual teachings, lakhs of young men and women gave up all kinds of distinctions and attachments and started adopting pure devotional service dedicated to Krishna.

Today, Srila Prabhupada is the only credible and pure devotee in the entire world, whose commentaries on Bhagavad Gita and Srimad Bhagavatam are reaching the masses in more than eighty languages. As a result, enthusiasm and joy are sprinklings in the lives of millions of people by adopting pure Krishna Bhakti.

Devotional service of the Supreme Personality of Godhead, Krishna, is being promoted in every city and village through ISKCON, the organization established by him.

This year is extraordinary because this year will be the 125th advent anniversary of Srila Prabhupada. On 1st September, the 125th birth anniversary of Srila Prabhupada will be celebrated. And on this auspicious occasion, a coin of Rs.125 will be issued by the government. Various programs will be organized in the ISKCON temples established across the world to commemorate this.

All of you are also requested to go to the nearest ISKCON temple, take shelter from this great saint, and take inspiration from his life to make your life successful.