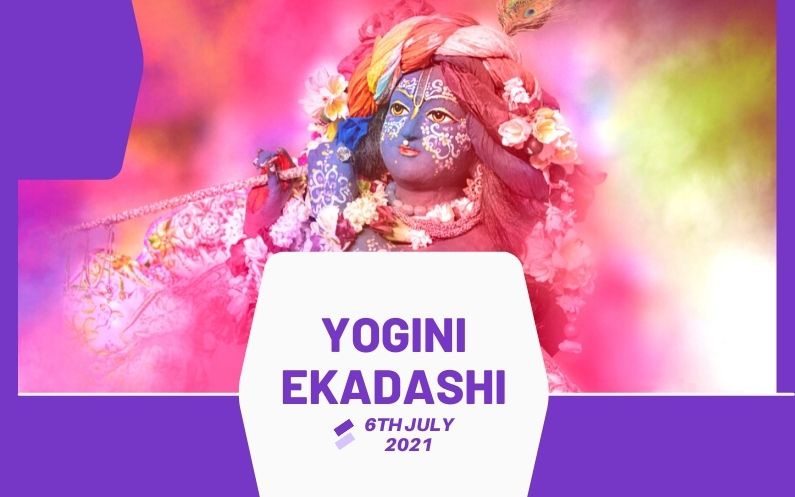 The Greatness of Yogini Ekadashi

We all experience happiness and sorrows in this life, but no one wants it and also everyone wishes for joy, but do we even know what true pleasure is?

What Are the real sorrows? First, of course, problems are the most significant birth, death, old age and disease of life because no one can escape from them, and it will happen to everyone.

Birth is painful, and we forgot it, that doesn’t mean labour is not painful, as death is unfortunate, old age is not good, diseases are not good, it’s sad, so what pain is not good?

An incredible Story about Yogini Ekadashi

Once upon a time, Dharmaraja Yudhishthira said,

O Lord, address the of Ashadha Krishna Ekadashi what it is thus?

Yogini Ekadashi is the liberator in heaven and the three worlds.

Donate on this Auspicious Yogini Ekadashi

Hey Rajan, “Now I tell you a beautiful story as described in the Puranas; listen carefully.

A place in heaven called “Alka Puri” was the kingdom, which was the treasurer of the gods.

There was a devotee of Shiva name Kubera. He used to worship Shiva every day; his Gardener was a Yaksha named Hem.

Who brought beautiful flowers from Mansarovar and give them to Kubera and which is for use in the worship of Shiva, used to do the same every day.

Hem Yaksha’s name Vishalakshi and this Gardener towards his wife was very infatuated.

One day he bought flowers from Mansarovar, but because of his love for his wife, he started laughing with his wife and having fun with her, and here king Kubera kept watching his way till noon.

In the end, king Kubera ordered a soldier to find out why the Gardener was not coming because he had not yet brought flowers.

The soldier’s said that.

Maharaj! Hem Mali is with his wife and must have been doing fun, extreme humour, and pleasure.

Listening to this, Kubera got angry and called him trembling; Hem Mali reached near him, King Kubera got angry and said, ‘ oh sinner Lowly, hypocritical, mischievous. You have disrespected my most respected Shiva Ji. That’s why I curse you, that you will suffer the separation of the woman and go to the world of death and become a leper.

Hem, Mali fell from heaven due to the curse of Kubera, and he fell to earth at that very moment as soon as he came to earth, while got into the body and his woman also become introspective at the same time.

After coming to the world of death, the Gardener suffered great sorrow and wandered without food in the terrible forest, couldn’t even sleep at night. But due to the effect of worshipping Shiva, he must have known about the condition of previous birth.

One day while roaming around, he reached the ashram of ‘Saga Markandeya’, whose age is seven Kalpas. Seeing them, Mali bowed several times from a distance.

Seeing them, the merciful and compassionate Markandeya Rishi asked him, what is the sin you have committed? Due to this condition, has it happened to you?

Hem Mali narrated the whole story to the sage; after hearing this, the saga said, “indeed you have spoken the truth in front of me, so I tell you a fast for your salvation.

‘If you observe fast on Ekadashi called Yogini Ekadashi of Krishna Paksha of Ashad month, then all your sins will be destroyed. Hearing this, Hem Mali was delighted and bowed the land to the sage; Markandeya Rishi raised her with affection.

Hem Mali observed this Yogini Ekadashi ritually according to the advice of the sage.

As the effect of this fast, Hem Mali got freed again in his old form and started living happily with his wife.

As per Markanday Rishi’s guidance, Hem Mali become free from all the sufferings and misfortunes.

Observing this fast of Yogini Ekadashi, one gets good virtue equal offering food to 80 thousand Bramins, and a person becomes virtuous by being freed from his all sins.

Ekadashi, therefore we yogis, may one by one destroy our sins and proceed on the path of sweet loving devotion to the Lord.