The Most Beneficial Kamika Ekadashi Story and its Significance 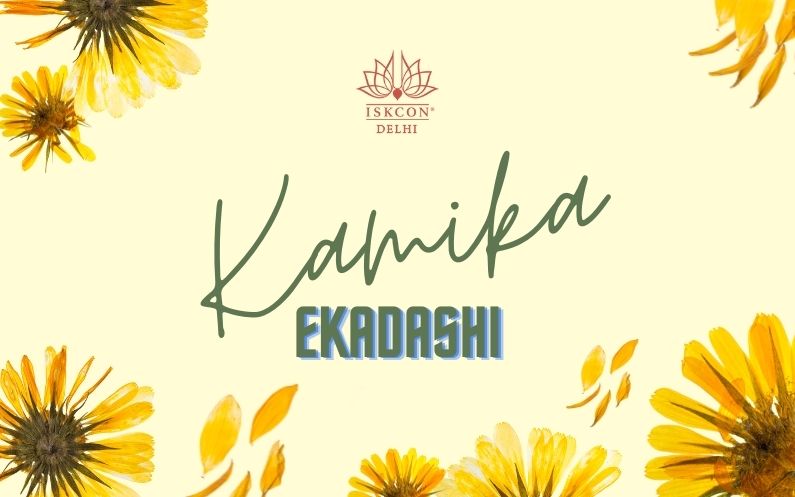 Man’s happiness and sorrow depend upon his virtue and sins. He lives a happier life if he does good to others. Otherwise, sinful conduct leads his life full of suffering. Every living entity wants to attain a satisfying life and get rid of its misery.

The omniscient Lord Vishnu is aware of this human tendency. So, his fellow saints, sages and great yogis composed and assimilated all the Sastras, the Veda, Puranas, and smrities. All these sastras have remedies of ‘attainment of happiness and cessation of sorrows’ for the wellbeing of humankind.

Fasting is transcendent and accessible among all the remedies. One of the fasts which are dearest to our gracious Supreme Lord is Kamika Ekadasi. Devotees observe intermittent fasting on this day. Thus, they spend more and more time in the remembrance and contemplation of the Supreme being.

The saintly king Yudhisthira said, that oh lord, I heard from You about Dev-Sayani Ekadasi. So kindly describe the glory of the auspicious Ekadasi, which falls on the Krishna paksha Shravan month.

Then Supreme Lord Sri Krishna narrated the conversation that had taken place between the creator of the universe Brahma and his son Narda muni on the significance of the Kamika Ekadasi Vrat.

The Supreme Lord, Sri Krishna, replied, Oh saintly king, Kamika Ekadasi arrives during the fortnight in the month of Shravan, which perishes all sins of human beings and fulfils the desired wish.

Narad Ji asked, “oh regent of the universe, please tell me about the Ekadasi, which occurred during the lunar day in the month of Shravan and what it is called? Who is the chief God to whom people should worship on that holy day? Also, kindly tell me the process that one must follow to observe it. What merit does it award to those who observe it? “

Then Brahma Ji replied, “Oh Narad muni, you have asked the question for the benefit of all humanity. So listen attentively, and I am going to tell you everything about this Ekadasi.

This Ekadasi is called Kamika Ekadasi. Just hearing the glory of Kamika Ekadasi bestows the merit equal to that of Aswamegh Yagya.

On this day, devotees attain all the great values by worshipping the lotus feet of the Supreme being Vishnu, who holds a conch shell, Sudarshan Chakra, Padam, and lotus in his hands.

All the Nagas and Gandharvas are worshipped just by worshipping the Lord Vishnu in the month Shravana. The way water can’t touch the lotus, in the same way, sins can never feel the devotees who observe Kamika Ekadasi. Whoever worships Lord Vishnu with Tulsi leaf, the Lord sets them free from all their sins.

The person becomes healthy and disease-free just by remembering and meditating. Planting Tulsi brings prosperity, and devotees eventually reside with Lord Krishna in his abode. Followers achieve devotion by offering tulsi to the lotus feet of Lord Vishnu. Even the Yamraj secretary, Chitragupta, is incapable of calculating the merit of those who burn ghee lamps and offer obeisances to Tulsi Devi.

A person who does Kamika Ekadasi vrat receives the blessing of the Supreme Lord, and he is freed from even heinous sin of feticide or killing of brahman. Not only the one who offers burning lamps to the lotus feet of Lord Vishnu, but even their forefathers also ascend to heaven and satiated with celestial nectar there.

Devotees who offer ghee lamps or burning lamps with sesame oil to the Supreme Lord Vishnu on this day get salvation and enter into heaven after death with the brightness of as many as millions of lights.

Significance of the Kamika Ekadasi

‘Oh Narad’, said the Lord Brahma, all the human beings scared of their sins, must observe the Kamika Ekadasi.

There is no other remedy than Kamika Ekadasi for being free from all sins. On this auspicious day, whoever offers Tulsi leaves to the lotus feet of Lord with their reverence and devotion, stay away from all sins.

Oh Narad, I also pay my obeisance to Tulsi Devi, the beloved of Sri Hari. Whoever says or hears the glory of Kamika Ekadasi with devotion gets salvation and returns to the Godhead
– Vaikuntha. Lord Sri Hari is almighty and foremost. He gets easily pleased with the sincere devotion of their followers.

Support ISKCON to maintain this portal and other services. We need your support in Prachar and Prasar.